The Detroit Institute of Arts as a culinary destination 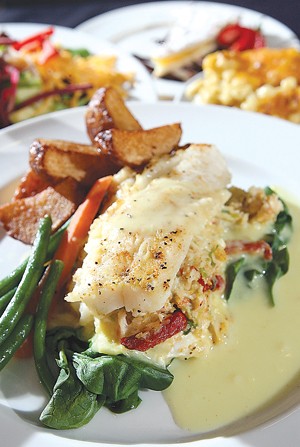 When the Detroit Institute of Arts reopened in November 2007, visitors discovered they could sit down in the Fashionable Living Gallery and experience, albeit virtually, a sumptuous eighteenth-century banquet ingeniously projected, course after course, on the tabletop. Alas, when those visitors come downstairs for lunch Wednesday through Sunday or for dinner on Friday night, they will have to make do without the liveried servants whose hands are visible at the no-calorie banquet on the third floor.

This is no critique of the quality of the food turned out by the Sodexo corporation, the caterer in CafeDIA and in Kresge Court. Unlike similarly renovated institutions such as New York's MOMA with its multistarred fine-dining venue, the DIA decided that it could no longer offer sit-down, white-tablecloth meals that had been a financial failure in the past. Instead, patrons settle for less expensive but relatively high-quality cafeteria fare in a handsome, minimally decorated space that can seat as many as 300. Overflow tables are often set up in the adjacent hall on the ground floor of the museum.

Sodexo is a respected international food-services and facilities-management corporation that handles meals for such museums as Chicago's Shedd Aquarium and corporations like Ford and the Bank of America. According to executive chef Larry Duren, virtually all of the food is prepared on the DIA's premises, except for frozen peas and carrots and several of the desserts and cakes.

Unfortunately, the kitchen facilities at the magnificent Kresge Court, with its soaring skylighted roof and atmospheric Renaissance architecture, are too small to support a full-service cafeteria. Instead, that iconic space is dedicated to diners who are willing to settle for adequate prepackaged sandwiches and salads, as well as hearty house-made Copper Pot soups and chili. Incongruously, perhaps, Kresge Court tables are cloth-covered. On Friday evenings, the lights are dimmed and a full bar is available in what becomes an even more romantic setting in a museum replete with romantic settings.

The nearby CafeDIA itself generally transcends its genre. Its six main areas include another Copper Pot soup and chili station, the extensive make-it-yourself Fresh Inspirations salad bar (39 cents an ounce), a pizza and calzone stand, the Rosemary Grille for grilled meat, fish, and sandwiches, a made-to-order Jazz salads and wraps area, and the Chef's Feature open kitchen for daily specials.

Although the soup station is the one that is first encountered, patrons should return to it at the end of their visits to other more labor-intensive stations where the wait on line for the cook to produce the order might be long enough to result in lukewarm soup. And that would be a shame because the chili is an unusually savory rendition full of meat, if a bit on the tame side, and the piquant mulligatawny soup, for example, approximates what one might expect in an Indian restaurant.

It is certainly worth the wait for the chicken-fajita salad, a huge dish full of grilled-before-your-eyes vegetables and meat. The chef at the same station constructs wraps, sandwiches and panini. If there is a crowd here, this might be a good time to visit the unusually creative salad bar; your salad won't be affected by sitting around on your tray while you wait for warm items.

The specials of the day are an eclectic bunch with, for example, the Chinese representative on one occasion, a respectable sweet-and-sour chicken dish, with vegetables that could have been crisper. The specials are priced at less than $10. Considering portion size and tossing in a drink and a salad, it would be difficult to spend more than $20 for a DIA lunch, which is a fair tariff considering the competition in other nationally celebrated museums.

The priciest items on the menu are found at the Rosemary Grille where, in addition to burgers, chicken tenders and fries, you can order salmon, steak and chops. An attractive array of desserts, bread pudding, and pies and cakes are also available.

Wine and beer selections are limited to a few choices with the former served in the airline bottles that have long been the DIA's vessel of choice. Those same mini-bottles appear at the bar in the Great Hall during the Friday night concerts in the adjacent Rivera Hall. Sodexo's management claims that these environmentally suspect containers must be used because of the limited storage space for unfinished bottles. They also save on corkscrews.

Sodexo is not involved with the DIA's second most romantic dining venue, the elegant Crystal Gallery, which opens before and between showings at the Detroit Film Theatre. Manager Cate Lauerman uses local purveyors to construct her modest menu of cheese platters, soup and vegetarian chili, Avalon bread products, and baguette sandwiches, with the mozzarella, pesto, and tomato combination the most popular. Even without the food, the high-ceilinged newly renovated room — check out the gold-leaf detailing on the windows — is a wonderful place to sip modest wine poured from real bottles.

Despite the absence of a real banquet comparable to the virtual one in the Fashionable Living Gallery, the food at the DIA should please most visitors who have worked up an appetite wandering through the splendidly redesigned and enlarged Detroit landmark.