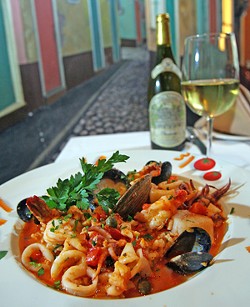 When I mention Luciano's to foodies from the west side, the name invariably draws a blank. If ever you needed evidence of the two different worlds we Detroiters inhabit (despite I-696), here is a perfect example. Quite well known to east siders, Luciano's is an upscale trattoria on the corner of 17 Mile and Garfield roads in Clinton Township. The establishment has been turning out award-winning red-sauced Italian classics for more than two decades.

The close-knit family that owns and operates the restaurant is composed of the eponymous Luciano Gianino, who is generally out front, his wife Rosa and son Salvatore, who are in the kitchen, daughter Lory, who is accounts manager, and daughter Sabrina and son-in-law Leo, who handle banquets.

Located in the prosaic Gar-Pointe strip mall, Luciano's, which seats 200, is opulently decorated with elaborately carved pillars and arches, an artificial palm tree, and white-clothed tables and elevated booths in the main room and two private curtained booths in the bar. Another dining area, which is dominated by a charming room-length mural of an Italian town with real lights in the windows, flaunts a carpet that looks like stone pavement, which leads, trompe l'oeil style, directly into the paving stones of the virtual town painted on the wall.

These surroundings, the Italian pop music that blares through the speakers, the liveried servers, and a festive air suggest that diners are attending a wedding. Of course, wedding guests would not dress as informally as many of those who frequent Luciano's.

Pasta specialties, which average around $16, come with soup or salad. The other entrées, most of which go for $20, are accompanied by soup and salad, a welcome pasta side, and vegetables, which, alas, are not al dente. Although the portions are large and Luciano's admirable garlic bread (along with incongruously inelegant foil-wrapped butter patties) is filling, the attractive array of appetizers is worth sampling. The charbroiled seafood platter ($22.95), which can satisfy four or more, includes an especially lively marinated octopus salad with tomatoes, scallions, onions and red peppers, as well as crunchy charbroiled shrimp and tender calamari pieces. Another winner would be the Neapolitan mussels Possilipo ($11.95), a generous bowlful of the little mollusks covered with tomatoes, and seasoned with basil, oil, garlic and white wine.

Among other starters are shrimp casalinga in garlic, cream and lemon, roasted sweet peppers and eggplant Napoletana. Although Luciano describes his kitchen as both northern and southern Italian, it leans decidedly toward the heavier and spicier cooking of Sicily, where most members of the Gianino's families originated.

The hearty minestrone soup, which brims with irregularly cut vegetables, arrived a bit lukewarm on one occasion. Luciano's is not the only transgressor here. Soup seems to arrive in that condition more and more these days, perhaps reflecting the fear that restaurants might be sued by litigious patrons who claim they burned their tongues on piping-hot broth. No temperature problem, however with the crisp chilled green salad enhanced by the smooth and subtle Italian (what else?) dressing.

No complaints either about the bountiful seafood pasta dish, laden with shrimps, clams, scallops and calamari in a savory marinara. The simpler, less expensive delicate ravioli suggests the care the Gianinos take with pasta offerings. More than 20 variations run the gamut from spaghetti with old-fashioned meatballs, creamy tortellini, fettuccini Alfredo and penne arrabiata to Luciano's unique penne with prosciutto, mushrooms and cream.

The most interesting of the chicken choices is the one with the most intriguing name, Mamma Assunta, which brings together sautéed breast medallions, artichokes and mushrooms in a thyme-lemon-white wine sauce that differs slightly from the lemon-based sauce in the chicken and veal piccante. As in most Italian restaurants, Marsala, piccante, parmigiana and even the Mamma Assunta chicken preparations are replicated in the veal dishes. The veal easily passes the tender test.

Whitefish, orange roughy, perch, tuna and salmon are among the fish mains, some of which are served with ammoglio, a tomato-based sauce. As for the shellfish, a classic sautéed scampi in a light-garlic-and-lemon-butter sauce merits praise, although the garlic is understated.

A mix of Italian and New World vintages, the respectable wine list is a bit pricey with not many selections under $30. The house-made desserts are anchored by a luscious strawberry cheesecake and a gossamer tiramisu.

With its solid traditional cooking and equally traditional decor, Luciano's deserves greater recognition from those restaurantgoers from the north and west who rarely venture into the wilds of Clinton Township.