Get your Irish up

Birmingham's Dick O'Dow's brings a taste of Ireland to town 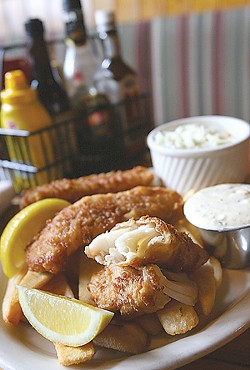 For the past 14 years, Dick O'Dow's has been Birmingham's most popular unpretentious watering hole. Created by the late Dick O'Connor, Peter Dow and Mitch Black in the central shopping district on Maple, the dimly lit pub, graced with simple wooden tables and chairs, faded wall murals from the Book of Kells, agricultural paraphernalia and a wide variety of Irish kitsch, is a surprisingly accurate re-creation of a rural local in the Ould Sod. In fact, much of the bar was constructed in Ireland and shipped to Birmingham by a Guinness subsidiary.

With music, several TVs, and often a large crowd of more than a hundred tipplers, the front room dominated by the bar can get a bit boisterous, as one might expect in any Irish pub. Those looking for a more sedate atmosphere can repair to the back room, which seats 75, featuring a huge fireplace — and no smoking or television.

Since O'Dow's Gaelic theme is Is Tu' isce Deoch Na Sce'al (A drink comes before a story), we should begin with the libations before moving on to the food. Guinness at $5.50 for an imperial (20-ounce) pint is de rigueur, of course, but there are 14 other beers on tap as well. Although Ireland does not produce wine, a handful of varietals from several other countries are available, most of which are less than $30.

The menu is expansive with such bar food as pizza, burgers, sliders, wings, ribs, mac 'n' cheese, ahi tuna and the like appealing to those not interested in sampling the Irish fare. One can understand why — the Irish kitchen is not as refined as the Chinese, French or Italian. Similar to its British, Polish and German cousins, it is heavy and starchy. However, sometimes that sort of grub is perfect to warm the cockles on Michigan's cold winter nights.

Among the appetizers ($6.99-$10.99), Dick O'Dow's struggles to maintain the Irish theme with its Guinness-battered zucchini and Irish nachos, but these aren't much different than one would find in a generic sports bar. More interesting if not entirely old-country is the Ballyshannon Brie, a wheel of warm brie glazed with caramel and accompanied with walnuts and apple slices. Along with a small bread loaf and crackers, this rather sweet preparation will accommodate several diners.

The same pattern of ersatz Irish is evidenced in the salads ($7.99) with the closest to the Emerald Isle — and still quite a distance — the "farmhand," with greens, cheddar and blue cheese, onion, tomatoes, celery and egg. Certainly the spinach with Michigan cherries, the Caesar and the antipasto are not native to Dublin.

On the other hand, one would expect to find potato soup in virtually every Irish pub, with O'Dow's thick potato-leek, presented in a boule, easily passing muster. Less satisfactory was a lemon-rice-basil broth that was too heavy on the basil.

Among the mains, the "Irish Classics" ($11.99-$15.99) are the best place to linger. Here one finds boxty, a unique dish whose foundation consists of two thick, slightly charred potato pancakes, garnished with baby asparagus and topped with beef chunks, onions and leeks, all of which is awash in a brown gravy. This strange but satisfying culinary mélange is worth sampling — if you can spare the calories.

An alternate is Irish stew served in another boule, containing carrots, onions, champ (mashed potatoes) and lamb in a thick broth. Although it looks similar, the savory shepherd's pie with beef and champ covered with cheddar is baked in a crust. Both the stew and the pie may be a bit light on the meat-to-vegetables ratio, but that's the way they were prepared in Ireland before that perennially poor land briefly became the Celtic Tiger.

The "Irish fry" or breakfast is far from light on the meat, since it consists of black and white pudding, sausages and bacon that come with fried eggs, grilled tomatoes and soda bread. Needless to say, this is another dish that only those with safe cholesterol levels should order. Bangers (sausage) and mash with gravy and baked beans also falls into that category.

Guinness-battered cod and chips with an admirable creamy coleslaw, corned beef with carrots and parsnips (when's the last time you saw parsnips on a menu?), wild Irish salmon with a Jameson's glaze, and stuffed chicken round out the Irish entrées. Jameson's wonderful whiskey also appears in the peppercorn cream sauce that dresses a 10-ounce Black Angus flatiron steak.

As for dessert, bread pudding is the perfect finish to an all-Irish meal. Topped with an oversized mound of whipped cream, this warm confection, with a dash of Jameson's, is another irresistible artery-clogger.

Compared to the ubiquitous Irish pubs maintained by chains in most American cities, Dick O'Dow's seems close to the real thing. And it fits one of Birmingham's recreational needs as a comfortable neighborhood tavern without pretense or attitude.