It's official: Prickly Pear Café is an Ann Arbor classic 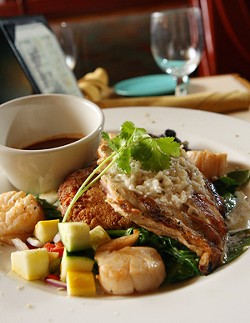 Not many restaurants can boast a recommendation from a 14-time Olympic gold-medal winner. Michael Phelps, who survived on a training diet of 12,000 calories a day in Ann Arbor (no calories for the bong), pigged out on the buffalo empañadas at the Prickly Pear, which has been serving Southwestern grub since 1991. Southwestern in this case means Tex-Mex plus. Owner Gary Pearce and chef Al Hamami have been there since its inception.

The Prickly Pear is a small, almost claustrophobia-inducing restaurant that seats only 55. If you can, choose one of the booths with high wooden dividers that line the stucco walls, because the bare tables that fill the center of this long thin room are close together and the aisles on either side of them are rather narrow. The light-colored walls are full of vibrant Southwestern art and symbols and the unusual painted tin ceiling complements the decor well.

Perpetually crowded, the café takes no reservations but will outfit you with a pager so you can stroll along Main Street until your table is ready. During the warm months, capacity doubles with a charming enclosed patio in the rear and tables out front on the sidewalk.

The generous portion of fresh chips and salsa that greets all diners is welcome, although the salsa is tamer than most. Among the most interesting starters ($7.95-$11.95) are the sweet-potato cakes, with guacamole and sour cream, and they appear again as sides on other dishes. Another one that goes beyond the Mexican kitchen is Navajo fry bread with chorizo chili or vegetarian black beans. The respectable corn-masa-breaded little calamari ringlets with red mole, red-pepper mayonnaise and jalapeño mustard do not come across as especially Southwestern, despite the way the menu describes the ingredients.

On the other hand, few local cantinas offer a crunchy jicama slaw, a slightly acidic mélange of jicama and red and green cabbage washed with honey vinaigrette.

Other salads include grilled scallops (definitely not from the Rio Grande) with guacamole and black-bean salsa and grilled portabella attractively presented with blue cheese and pepper chutney in a herb-pepper vinaigrette. Mushrooms make their appearance in several other places on Prickly Pear's bill of fare, including a three-mushroom bisque. But if you can order only one soup, the rich and slightly sweet signature butternut-squash broth is the way to go.

Like most restaurants these days, no matter the ethnic specialization, the Prickly Pear has a take on roll-ups. Vegetarians can have one stuffed with refried beans, red and green peppers, cheese, lettuce and tomatoes, while carnivores can have theirs stuffed with slices of flat-iron steak and similar garnishes with the addition of sour cream. Both come with that delightful jicama slaw.

For his mains, Hamami features familiar Tex-Mex items, such as burritos, fajitas, quesadillas and empanadas, which, as with all the entrées, come on a heaping platter full of tomato rice and baked black and pinto beans and salsa. Indeed, the platter is so heaping that it may be wise to take advantage of half-order options that cut the tariff a few dollars for most house specialties, which are in the $14-$15 range. At first glance, that appears to be a bit expensive for burritos, but you are on Main Street's high-rent restaurant row and, more importantly, they score well above the norm.

Vegetarians will again be pleased with the nicely blended spinach and Chihuahua cheese enchilada while the empañada stuffed with chicken is enhanced with a toasted-pumpkin-seed cheese sauce. Another silky smooth pumpkin-seed sauce with mushrooms highlights the sautéed chicken sope that comes with a pan-fried masa tortilla. As for Michael Phelps' favorite empañada, which is almost always available but does not appear on the menu, the tender slices of marinated buffalo meat, slightly sweetened with sun-dried cherries, suggest the celebrated swimmer knows something about good cooking. Because the meat comes from a North Dakota supplier, Hamami cannot always be certain it will be available on a daily basis.

Scallops and shrimp quesadilla, pan-fried crabcakes with a chili-chutney sauce and chicken poblano rellenos are other options. Huge fajitas for two at $19.95 are a bargain.

Nine Mexican beers, along with just as many from other countries, eight tequilas and, of course, regular and "gold" margaritas are what most sots select with their meals. However, the decent wine selections, many of which do not crack the $20 barrier, are another option.

For dessert, the cheesecake and key-lime pie, made in-house, are more than respectable.

In the competitive Ann Arbor restaurant business, the fact that the Prickly Pear has been around for almost 20 years under the same management out front and in the kitchen is a tribute to its faithful as well as innovative renditions of the Tex-Mex repertoire. Plan on a doggie bag.

Mel Small has been dining for the MT off and on over three decades. Send comments to letters@metrotimes.com.