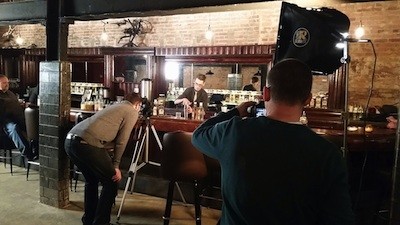 Props to Detroit City Distillery, which opened its tasting room in Detroit's Eastern Market last year. The distillery scored a segment on WCMU's Destination Michigan, and that segment is scheduled to air tonight at 7:30 p.m. (See the episode's teaser below.)

We spoke with producer Courtney Jerome this morning about the segment, and she told us, “We had a great time. Our crew went down to Detroit City Distillery and met with the managers and a few of their bartenders and learned about everything they’re working on there, from specialty spirits to creative cocktails. They were very hospitable, and we really enjoyed our trip.”

Local viewers should be able to find their local station, WCMZ, among their cable channel choices, or on broadcast channel 28-1 and 28-2. Can't catch it tonight? No problem: WCMU will be uploading the show to the station's YouTube channel a bit later this week.