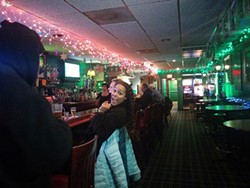 A few weeks ago, we reported on this Thrillist listicle about about how all Detroit suburbs suck. Written by former Detroit-based food writer Nicole Rupersburg, the cheeky list really got people going.

Well, Rupersburg is writing about Detroit again, this time talking up the city, rather than taking funny jabs at its outlying suburbs.

Published just today, "Detroit's Best Irish Bars, According to a Guy Named Sully" mentions Foran's Grand Trunk Pub, Nancy Whiskey, Danny's Irish Pub, and even the Old Shillelagh. Check out the whole list and what both Sully (who happens to be Phil Sullivan, head brewer at Kuhnhenn Brewing Company) and Rupersburg have to say about each place. As usual, it's the writer's brassy and audacious comments that are the best part.