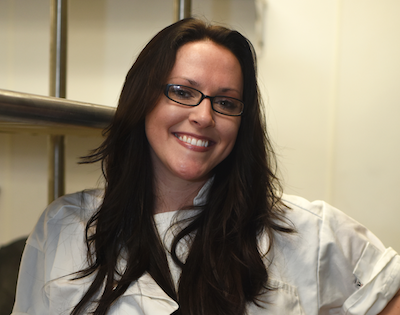 Kate Williams, the talented and talked-about local chef who headed up the kitchen at Republic (and was to do the same at the long-anticipated Parks and Rec Diner), will be leaving the restaurants inside downtown Detroit's GAR Building. Republic's general manager Lisa Carleton confirmed today that the rising culinary star put in her two-week notice at 6 p.m. last night.

Williams drew sensational reviews when she was chef at Midtown's Rodin, which closed shortly after her departure in 2013. Last year, her local celebrity helped create quite a buzz for the two restaurants, which are owned and operated by Mindfield Video Production, the Detroit-based creative studio that gave the GAR building its ambitious makeover. Carleton tells Metro Times that the owners had wanted Williams to stay.

"We wanted to work with Kate," Carleton says, "and it was her own decision to leave the restaurant."

Carleton says that revenue problems played a role in the management's decision to bring in certified master chef Kevin Gawronski, formerly of Schoolcraft College, as a consultant. Carleton says, "He taught at Schoolcraft for a number of years. He’s consulting at places in Chicago, all around Detroit. He’s a very well-respected master chef who has a lot of experiences with getting finances in line."

Carleton stresses that the menus at both restaurants will remain much the same while the owners quickly regroup and move forward. "We’re not going to do massive, huge changes and revamp the whole thing," Carleton says. "We’re not going to lower the quality. Right now we are still in discussion because we had planned on working with her until 6 o’clock last night. We are talking with Kevin and figuring it out, but we want to stay in the same direction … it’s a good direction. We’re not even planning on shutting down for a short time."

For her part, Kate Williams wanted to stress to us that there's no acrimony, and the departure has more to do with where she wants to go than anything that's happened at Republic. She will be staying on through the next two weeks, by which time she hopes to have helped open the long-awaited Parks & Rec Diner. With assistance from Carleton and the owners of Mindfield, she sent us this statement: "In the hopes of getting ahead of potential rumors regarding chef Kate Williams’ departure from Republic, the three owners, general manager and executive chef would like to express our past, current, and ongoing mutual respect for one another and mutual best wishes for future successes. The amount of success that has been achieved at Republic over the short time that we’ve been open has been humbling, and all five of us anticipate nothing but good results to continue, both for the restaurant and for chef Williams as she continues to pursue a highly successful career in a new endeavor. The departure is made on the best of terms with mutual respect across the board."