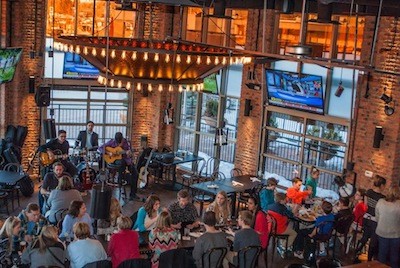 Last year, I wrote an essay about the tendency of old-fashioned Detroit businesspeople to view competition as a threat. You might see it as the protective posture of a class of businesspeople who’ve fought hard for their share of a dwindling market over the years, and don’t want other people to “steal” what they’ve come to see as “their customers.”

We in Detroit presume that, in order for a business to succeed, competition is bad. From the lowly brick-and-mortar greasy spoon operator complaining about the food truck outside his door to the billionaire developer who wants to vertically integrate the parking, restaurants, and residential components of his campus-style development, we seem to have lost sight of the way thousands of individual decisions and enterprises create an actual city. The more small businesses are on a main drag, the more different sorts of people walk down that street. And more different kinds of folks on the street attract newer businesses. At a certain point, it reaches a critical mass. … Instead of fighting a decades-long battle against neighboring businesses or new ideas that seem threatening, our business leaders should embrace the new small businesses in their midst. Instead of trying to be the king of the hill, the last remaining business, the sole landowner in a given area, our titans of enterprise should loosen their schemes to create monopolies and let others stake their claims right in their back yard.

The people up at the top of Detroit’s business community may or may not be embracing this idea of “co-opetition,” the theory that by working to foster more individual businesses along Detroit's main streets, we make the city's rebirth more rapid and complete. But after a few weeks of interviewing folks for our People Issue, we can say that it’s definitely percolating up from the bottom. And it’s strongest in our food and drink scene.

Motor City Brewing Company’s John Linardos comes from the brewing scene, which has, in many ways, set the example for how businesses can work together and treat one another with fellowship and mutual aid. Linardos, for example, was a founding member of the Michigan Brewers Guild, sitting on the board of directors for the first three years. Instead of locking horns over distribution, those in brewing have created a network in which they help each other. It has resulted in refrigerator cases filled with the work of local and national craft brewers, a selection dwarfing the big brewers.

Linardos told us: “That’s kind of been a unique aspect of the industry as a whole. If you go to a guild event in Michigan or you go to a National Brewer’s Association event, you’ll find there’s no other industry that shares the level of information that brewers do. I went to our winter conference up in Harbor Springs this winter, and both New Holland and Founders did two separate quality control seminars. And they shared all of their charts that they developed. So, yeah, I was sitting there going, ‘Man, you’d never go to a pharmaceutical convention or an engineering convention and have these companies sharing all this information.’ That is pretty unbelievable. As more breweries come on, I don’t know if there’ll be that ‘Kumbayah,’ but we’ll see.”

That attitude seems to be bleeding over into the hospitality business. When we spoke with James Rigato, the 30-year-old chef now opening his second restaurant in Hazel Park, the camaraderie of craft brewers clearly struck a chord with him. It’s a point discussed in his profile, but worth underlining here. For instance, discussing two restaurateurs in their 50s, with decades of experience in metro Detroit dining between them, Rigato expressed surprise that they’d only met each other two years ago.

Rigato said: “Like, what the fuck? How can you open a restaurant in the middle of another chef’s heyday and never meet? I know everybody. Like Andy Hollyday, Doug Hewitt, Nikita Sanches, Sandy Levine, they’re all my friends. If you know a chef in a good restaurant, chances are I’m friends with them. How could those two have just met a couple years ago? Why aren’t they hanging out, drinking beer at Ye Olde’s? I don’t know what happened. I think it was a competitive business model maybe 10 to 15 years ago, you’re fighting for the same crowd and you’re doing the same thing: your filet versus his filet. There were chefs doing cool things 10, 15 years ago, but I don’t know if it was fear, or maybe there was a lack the network. Maybe social media and the localizing of the global economy has helped.

“Ultimately I’m against Eddie Merlot’s and Ocean Prime and fucking Morton’s and Chili’s. Those are the fucking enemy. The dude opening up an independent restaurant where he’s cooking his ass off, that’s not my enemy, that’s my best friend. Are you kidding me? These are the guys that are gonna generate customers, generate a point of view. … We’re like-minded individuals. Yesteryear? I don’t know, maybe it was competition. Nowadays, yeah, if you’re a like-minded individual, chances are we’re friends.”

Hearing such words from our closely watched movers and shakers is absolutely refreshing. The way to becoming a city endowed with great restaurants isn’t to crush perceived opponents: It’s to create a community of businesspeople that draw people out to dine.

The billion-dollar question is: Can that idea percolate up to the mid-level and large businesses who have a vested interest in megaprojects under their control succeeding instead of a thousand independent, small ones? We’ll see. Right now, there’s reason to be encouraged.