Meijer opened its second store in Detroit — which brand will step up next? 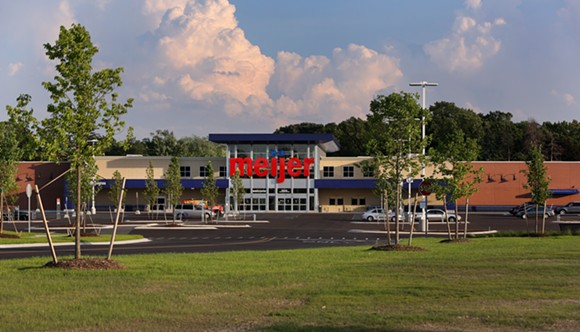 On Thursday, Michigan-based grocery chain Meijer opened its second store in Detroit. Located at the intersection of Grand River and McNichols Avenues in the city's northwest side, the nearly 200,000-square-foot store was built on the site of the former Redford High School. According to a press release, its location makes it a walkable destination for the Old Redford and Brightmoor neighborhoods, and it is expected to bring more than 300 jobs to the area.

The release states the store will offer more than 600 types of fresh produce, a drive-thru pharmacy, walk-in health screenings, immunizations, and diabetes-care pharmacists. And the store will also feature many Michigan-made products, such as Detroit Bold Coffee, Better Made Potato Chips, Sanders Ice Cream, and beers from Motor City Brewing Works.

A non-pretentious, affordable, mainstream chain is a welcome addition to a city that has been branded — unfairly or not — as a "food desert." Of course, one has to wonder — why did it take the company nearly 80 years to finally come to Detroit? And it's worth pointing out that both stores are located less than two miles south of the 8 Mile Road border. What about serving communities that are located further from the amenities of the suburbs?

Nevertheless, Meijer deserves kudos for making a statement. Which brand will be next to follow suit? Target currently has no stores located in Detroit. Apple is happy to use the story of Detroiters to sell iPads, but are they willing to try and cash in on Detroit's growing reputation as a tech city by building a store within city limits?