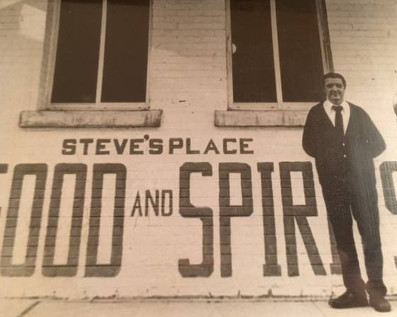 Steve Francis was born in Portland, Ore, but was raised in Greece, and he retained a thick Greek accent. He once told MT that, in the 1970s, the bar was busy, serving a still-bustling downtown: "It was a good location, and the bar made a good profit. … It was a good investment."  Over the years, the bar also enjoyed a regular spillover crowd of post-show drinkers from St. Andrew's Hall next door. But in recent years, outshined by glittering casinos, remodeled cabarets, and stylish lounges, Steve's Place had become a ghostly, often-empty room presided over by Steve himself. It could be quietly surreal. MT's Alysa Offman compared a recent visit to the throwback bar to an odd dream.

For more than a decade, the bar was mere blocks from MT headquarters, and it turned the head of many of our scribes. Thirteen years ago, when dubbing Steve's Place "Best Bukowskian Watering Hole,"  MT described it as looking like “a 1940s Robert Mitchum film projected onto an old screen,” frequented by “the day drinkers, the lifers and the occasional late-night hipsters.” Even then, the bar could get so silent, one might hear a few sentences in the course of almost an hour.

A profile by “Detroitblogger” John Carlisle presented a moving portrait of a man who knows no other life, even as he runs the bar with the heat off because it' “costs too much to heat." He called Steve “a remnant from Old Detroit — a charming, grandfatherly, Old World gentleman who still wears a tie and a checkered shirt to work every day, who hitches his baggy trousers high, who glides in little shuffles across the floor in scuffed dress shoes.”

And Steve stuck with it, running the bar each day, catering to long-ago customers dropping in, people Steve often remembered with a smile.

On June 19, a Facebook page devoted to the bar announced that Steve had entered hospice care. Another post to the page said Steve collapsed and was hospitalized three weeks ago, diagnosed with advanced cancer, and transferred to hospice. A post yesterday evening said he died at 3:30 a.m. yesterday.

The statement added that Sophie would not keep the bar open when Steve died.

It also said that the family is holding funeral services in Greece in a few weeks, and that Steve will be buried there, and that Sophie will move to Greece soon “where she has more family.”