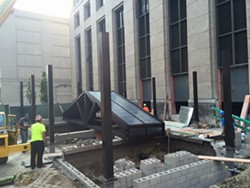 The forthcoming Townhouse Detroit, touted by the Free Press as "a dining destination unlike any other place in metro Detroit," is gearing up to open its doors later this month.

The daily says the highlight of this space is its glass-enclosed, outdoor "house," which will be used as its main dining room and that retracts to let in the open sky. The 314-seat restaurant, going into One Detroit Center at Woodward and Congress, will feature a whiskey lounge, a seafood raw bar, open kitchen, a fire pit, surrounded by lounge seating and pear-shaped European Hornbeam trees in planters.

The restaurant will open for lunch, dinner and brunch from the start, a departure from other establishments, which have staggered their meal services in stages. In addition to the sprawling dining space, Townhouse Detroit will feature a U-shaped bar that seats about two dozen, the Freep reported.