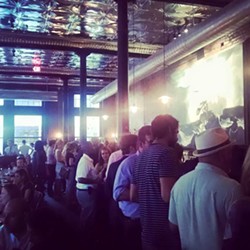 A lot has happened in the year since Wright & Company opened its doors downtown. And on Tuesday, among a standing room-only crowd of hundreds of supporters, founders Dave Kwiatkowski and Marc Djozija celebrated their first year in business inside the historic and immaculately-renovated 1891 Wright-Kay Building.

Among those in attendance were neighbors from the Library Street Collective and Supino's Pizza owner (and Djozija pal) David Mancini, while local DJ Nothing Elegant turned tables near a window overlooking Woodward Avenue just above the newly christened John Varvatos upscale men's clothier. When it opened last summer, Wright & Company was celebrated for its inventive take on small plates, vast array of craft beer and cocktails amid a sophisticated ambiance made up of dark wood, heavy silverware and animal mounts. Since then, despite ongoing M-1 construction, which has crippled business at other restaurants along the corridor, this spot has thrived.

Djozija tells us the restaurant's first year has been an unexpected success. "You're only as good as your customer base. It's really surreal how everything has come together," he told us while standing near the kitchen, supporters stopping by to give him hugs as they squeezed their way through the crowds to the elevator. "Detroit was ready for something different. I think people, many people here, took the challenge, really the gamble because it was a gamble, to make it happen."

Table and Bar Wright & Company downtown One Year In