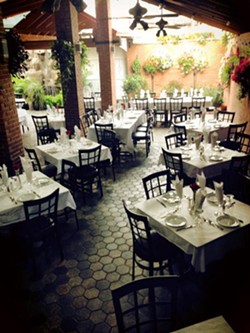 The lineup of participating restaurants at this fall's Restaurant Week, to be held Friday, Sept. 18 through Sunday, Sept. 27, have been announced and 11 eateries are being added. The newbies on the list of eateries that will offer diner three-course, prix fixe dinners include: Bistro 555, Centaur, Chartreuse Kitchen & Cocktails, El Barzón, Gold Cash Gold, Jolly Pumpkin, Mario’s, Sindbad’s. Townhouse Detroit, Town Pump Tavern and Traffic Jam & Snug.

Of these, several spots will offer signature dishes at a slightly lower price point of $25, including, Jolly Pumpkin, Santorini Estiatorio, Centaur, Bistro 555, Traffic Jam & Snug and The Block (formerly The Grille Midtown).

The Detroit Restaurant Week launched in 2009 as a partnership project between Paxahau Event Productions, the Downtown Detroit Partnership and partner organizations in Midtown, Corktown, Eastern Market and New Center to support and promote fine dining restaurants in the city. Each year, the event has grown to include more restaurants. This year's edition of El Barzón adds for the first time a Mexican establishment that's a bit further removed from the city center. Organizers Paxahau say that more than 380,000 diners have enjoyed DRW to date, generating more than $7 million in sales for participating restaurants.