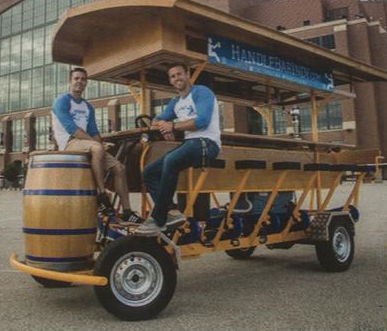 Consider it the ultimate form of multitasking: pounding back cold ones while seated at the bar, while pedaling around downtown Detroit with 15 of your favorite bros. That's the idea behind the pedal pub, which is hitting the streets of downtown Detroit Oct. 2. A second, non-alcoholic bicycle bar will also be coming to Royal Oak.

Think of it as a pub crawl on wheels. Users supply the food and booze (wine and beer only, no glass containers, no hard liquor), and make stops at various bars and restaurants. The tour starts from the Z Garage on Gratiot.

Ten of the available 16 bar stools are equipped with pedals, which help propel the contraction about. If you're worried about catching a BWI (bicycling while intoxicated) charge, never you worry, the company supplies a designated cyclist, AKA a "Bar Handler.

Though coming off as kind of gimmicky, the pedal pub could make sense in Detroit, which is realizing a growing bicycle community. Groups like Slow Roll already take Metro Detroiters on cross-city critical mass tours, showing participants various points of interest and then finishing up with drinks at local bars. Add to that, increasing interest in food and drink culture in the city, and this may be a hit for those open to trying both at once.

Already rolling elsewhere in Indianapolis, these multi-person bikes are owned and operated by Handlebar Detroit, founded by brothers Brian and Stephen Lindsay, from Ludington. On prime Fridays and Saturdays, the cost is $400 for a two-hour tour, other days it'll run you $300. For more information, go to the company's website.