by Ken Voyles and Joe Cabadas 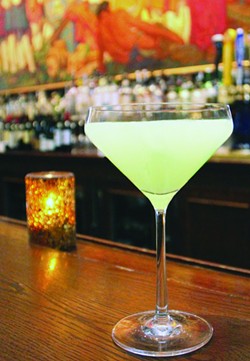 The fabled Detroit Athletic Club cocktail, the Last Word, is nearly as old as the modern DAC Clubhouse, making its club debut in the summer of 1916 less than a year after the downtown clubhouse opened in 1915.

Made with two classic liqueurs plus Plymouth gin and fresh lime juice, the drink’s survival as an international phenomenon is largely due to an obscure reference in a 1950s cocktail book unearthed by cocktail mavens in Seattle in the early 2000s.

Now the DAC-created cocktail has legendary status and is sipped by diners around the world, from Seattle to New York and from London to Amsterdam.

Several myths still surround the creation of the cocktail. The most persistent is that that a vaudeville actor Frank Fogarty created the drink at the Club during the Prohibition era.

Ongoing DAC research confirms that the Last Word was already in existence for months before the only time he was known to have visited the Club. In addition, there is no evidence that Fogarty was ever a DAC member, employee or bartender. In fact he was known to be living and entertaining in New York during the early 20th century.

What is known by the DAC is the approximate date and direct connection of the cocktail to the Club thanks to a mention in the DAC News magazine. This first reference to the Last Word appears in a 1916 “souvenir menu” sent to each member with the July-August 1916 issue of the DAC magazine.

With a cover designed by famed artist A. Duncan Carse, the menu included all of the culinary items available at the Club as well as wines, drinks and a long list of cigars.

Among the many specialty items was a listing of available cocktails, including a drink called “the DAC” and another simply labeled “Last Word.” There were no recipes for any of the cocktails on the menu and further searches of early DAC records have not turn up any other mentions of the drink.

Fogarty enters the mythology surrounding the Last Word when he came to the Club in December 1916 months after the souvenir menu’s release.

“Our sleuths do not always hear of the many attractive private dinners given at the Club, but there was one corker given last month which did come to our notice and it deserves a word of mention,” the DAC News reported in its January 1917 issue.

Charter member Emory W. Clark had invited Fogarty to entertain the directors of the First and Old Detroit National Bank and prevent them “from talking shop” with some of his lively stories.

Known as the “Dublin Minstrel,” Fogarty was one of the most successful monologists in vaudeville, having started by performing in New York’s Brooklyn borough. He also came to Detroit in 1914 and 1915 to entertain at Detroit Board of Commerce events.

During his DAC visit it seems likely that Fogarty was introduced to the Last Word cocktail. As noted earlier, the cocktail was already on the DAC’s menu in 1916 so that when he returned to New York, Fogarty could have then passed on the recipe to others.

In fact the 1951 Bottoms Up book by author Ted Saucier supports that idea. Saucier credited Fogarty with “introducing the Last Word around here” and noted the cocktail came “courtesy of the DAC.” Saucier was the long-time publicist for the Waldorf Astoria Hotel in New York city so his use of “around here” clearly suggests that Fogarty brought the drink back to New York, not that he necessarily created it.

Saucier also thought the drink was created in the 1920s during the height of Prohibition. An additional source, a 1968 Danish book on cocktails, claimed the Last Word was invented at or by the DAC but it is likely just repeating Saucier’s claims.

The cocktail’s life at the Club was no doubt cut short when Michigan went “dry” in mid-1918 after the state’s voters passed a prohibition amendment to the state’s constitution. A year later, the rest of the nation went dry as the 18th Amendment to the U.S. Constitution was passed to prohibit the manufacture, sale and consumption of alcoholic beverages.

The DAC followed the letter of the law, prohibiting the sale and consumption of alcoholic beverages within the Clubhouse, though there are rumors that some members smuggled illicit booze into the private suites. However, Saucier’s book, which misidentified the time when the Last Word was made, led to later-day speculations about how and why such a subtle cocktail could have been made during the Prohibition era.

“It’s fascinating to think that such a complex drink as the Last Word was created at the Club,” says Hassan Yazbek, the DAC’s director of food and beverage operations. “Clearly it was first offered to members in 1916 but we still can thank Saucier for sharing it and helping to keep it alive.”

The recipe for the Last Word was rediscovered in 2003 by a renowned Seattle bartender, Murray Stenson, at the Zig Zag Cafe. Becoming a sensation around Seattle, it began to appear again on drink menus in New York, Chicago, San Francisco and then around the world.

Modern-day DAC members first learned of the drink and its origins six years ago, when a Seattle newspaper contacted the Club for a story about popular cocktails.

The DAC fully embraces the Last Word, returning it to its menu in 2009 and even creating a lounge on the rooftop by that name.

“Members find it a truly intriguing cocktail,” says Yazbek. “It’s a thrill to serve such a famous drink at the Club. We are not going to let it disappear again.”

The Last Word — a DAC, and Detroit, original.

A version of this article was originally published in 2015 in the Detroit Athletic Club magazine, the DAC News. It is reprinted here with permission.