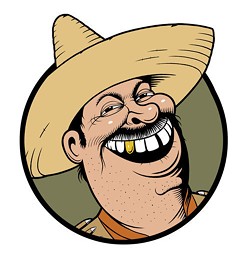 Yelpers can be pure evil, we think that's established. But most of us still turn to the free-for-all review site when we're headed to a new place to kind of get the CliffsNotes of a spot. That's what we did for our most recent restaurant review and we almost immediately regretted it, as many of the "critiques" were tinged with racial bias that really had nothing to do with the quality of the food when describing Tienda Mexicana, a popular taqueria in Madison Heights.

We knew we weren't alone in our frustration (to put it mildly) with Yelp. The consensus reaches far and wide: restaurant owners, servers, fellow diners, and even the likes of South Park creators Matt Stone and Trey Parker (the show recently lampooned Yelp critics, likening them to terrorists) - all sounding off against internet trolls who feel entitled to slam local businesses, often without merit.

That's why we turned to good friend and fellow alt weekly food writer, Gustavo Arellano, who is also editor-in-chief of the OC Weekly in Orange County, Calif., as well as the founder an author of the syndicated Ask a Mexican column. Every week, Arellano irreverently pokes holes at negative stereotypes about Mexicans by answering readers' questions. They range from the absurd: why do Mexicans swim with their clothes on? To the genuinely curious: Why Is Menudo the food of the Gods? To the obscenely racist: Why don't Mexicans have enough gratitude for America to learn to speak English? Are they too stupid? Too lazy? The Mexican is syndicated in alt weeklies across the country, has been published into a book, and has made numerous appearances on local and national television and radio news programs.

This week, he chose a question posed by yours truly and sought to explain why Yelp is especially problematic when it comes to Mexican cuisine.

Here's our question: DEAR MEXICAN: I'm wanting to review a hole-in-the-wall spot that apparently makes the best tacos. Yelp reviewers keep commenting on how run-down the space is but somehow equate "doesn't look like much" with the authentic Mexican food experience. Is this all just pendejadas [bullshit] (my gut says, "Hell, yes"), or is there something to it? Detroit Dama

Arellano starts off by asking why we even bother with Yelp. " Yelp is many things, but a guide to great comida mexicana it ain't." He goes on to explain that the litmus test for a great Mexican restaurant is in the food (oh, and maybe a calendar on the wall from the local tortilleria). You can read his full response here.

In a time when any asshole can log onto a site and have a platform to dispense ignorance under the guise of being a critic, it's refreshing to have some backup.