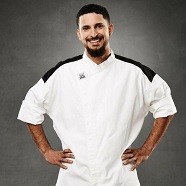 The next season of Gordon Ramsay's Hell's Kitchen premieres Jan. 15, and with that, two Detroit-area chefs will be vying for an opportunity to head one of the celebrity chef's kitchens.

Jared Bobkin, 30, executive chef at Local Kitchen and Bar in Ferndale, and Hassan Musselmani, 25, an independent chef and consultant, both auditioned for spots on the show over the summer. Detroit's dining scene being as small as it is, the two were already good friends and knew they would both be applying.

We spoke to both chefs, who agree that their making the cut on the reality competition is yet another sign that Detroit's restaurant industry really is taking off. The show, in its 15th season, also features a much younger and professional group of chefs than in seasons' prior, including Musselmani, who at 24, was the youngest chef to be featured on the series.

"I remember talking to another chef back in 2012 and thinking that Detroit was 10-15 years behind the times," Musselmani said. "In the past 2-3 years, it's crazy to see all the different concepts that have been opening up."

Bobkin echoed that sentiment, saying he's hoping his and Musselmani's appearances will help further Detroit's reputation as a culinary destination.

"It's not just L.A., New York, or Chicago, Detroit is a culinary city, even if it's not a well known city. It's important that people don't see Detroit as just the Motor City, it's now a food city, and hopefully it's portrayed in a good light," Bobkin tells us.

Bobkin was among the first 10 in line to audition for the new season. Fancying himself has having bit of Ramsay's flair for theatrics in the kitchen, he believes propensity for throwing out an F-bomb in the kitchen and dry sense of humor helped him stand out during auditions.

Musselmani, who's worked as a freelancer for the past year and a half, helping new restaurants open, catering private events, and otherwise filling in at kitchens when called upon, has been using this exposure on the show to leverage his consulting business and eventually open a food truck.

To be called Drunken Rooster, he and a partner plan to serve up New American street food, utilizing both their backgrounds. Musselmani's father, of Arabic decent, heavily helped inform him in Middle Eastern cuisine, while his partner boasts expertise in Italian, Mexican, and other ethnic cuisine. The two hope to infuse those backgrounds to create menu items like a pork shawarma taco.

As for their meeting Ramsay, known for his at times explosive temperament in the kitchen, Bobkin and Musselmani said meeting him was surreal at first, both having grown up watching his show.

Details about the season, of course, weren't disclosed, but we did score a sneak preview trailer of the season, which can be viewed here: