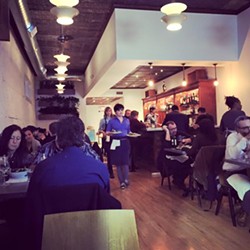 It's been a long while since news broke that Dave Mancini of Supino Pizzeria fame would open La Rondinella Italian eatery in Eastern Market, a good year and a half in fact. And there have been a number of reported false starts, the latest in mid-December when, according to to the Freep, Mancini had to halt his soft opening because some paperwork for the city still needed signing.

It would appear that the red tape has finally come down, as the restaurant is now set to officially open Jan. 5. A Facebook posted New Year's Eve made the announcement.

Mancini got started on revamping the space (the former Taste of Ethiopia) next door to his popular pizza shop in spring 2014. Back then, he had hoped to have the spot up and running by the end of that summer. Alas, as is common in the city's rapidly-changing restaurant industry, the opening kept getting pushed back.

To keep the buzz alive, the chef-owner held the occasional popup, giving fans a preview of the menu, which will feature fresh pasta, gnocchi, and other rustic Italian cuisine. When the spot did soft open last month, guests were already singing the menu's praises. To start, the hours are set for 5 p.m. to 10 p.m., Tuesday-Saturday. We'll be sure to stay on top of this development, should anything change.

La Rondinella is set to officially open on Tuesday, January 5th! Our hours to start are Tuesday through Saturday, 5:00p...