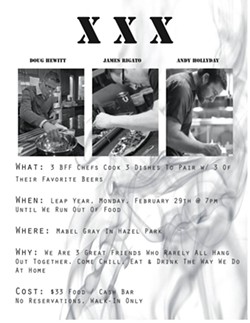 Because it's Friends Day, we thought we would let you in on a little something that three pretty well-known chefs who happen to be BFFs are planning for later this month.

Chefs James Rigato (Mabel Gray, The Root), Doug Hewitt (Chartreuse), and Andy Hollyday (Selden Standard) will team up Feb. 29 at Mabel Gray to cook, drink beer, and chill (a rarity for the three amigos, with their busy schedules).

In keeping with the laid back vibe they're trying to capture, there are no advanced tickets available, no reservations, and the cost for three dishes prepared by each chef will go for $33 (a bargain compared to similar dining one-off events). Beer pairings extra. Mabel Gray is at 23825 John R Road in Hazel Park.