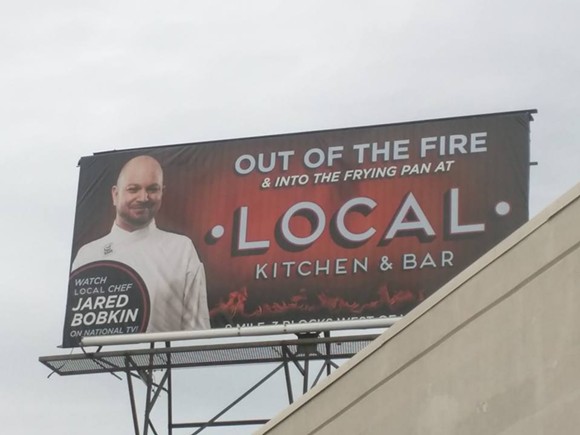 Fans of Chef Jared Bobkin, who vied for a win on the popular Hell's Kitchen reality show, is getting some love from the restaurant he works in in a big way. Drive north up Woodward between Nine Mile and Woodward Heights and you'll see his likeness and name of that Ferndale-based eatery, Local Kitchen and Bar, on a giant billboard.

Co-owner Brian Siegel tells us he had the ad posted at 23236 Woodward earlier this week and so far the response on social media has been overwhelming (he's also kinda hoping the promo will result in renewed interest in Local, founded just over three years ago by him and Chef Rick Halberg). Bobkin was one of two Detroit-area chefs to get picked up to compete on the current season of the Fox cooking show hosted by Gordon Ramsey. Bobkin and fellow Detroit contestant Hassan Musselmani have been riding high since well before the season premiere, making local appearances, and using the experience to create buzz about their work. And now this billboard takes the excitement to new heights. The signage will remain for three months.