Taste of Ramadan: Meet one of Banglatown's earliest Muslim families 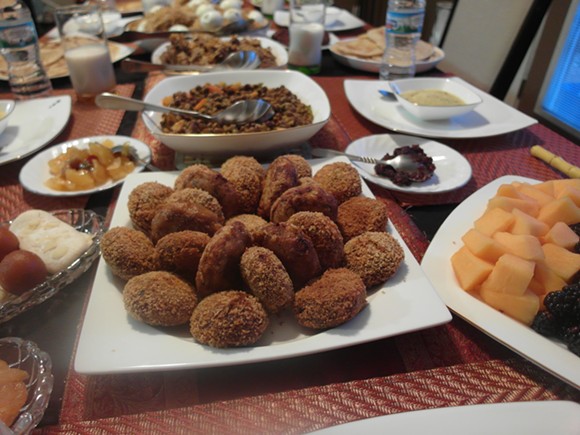 It’s just before Iftar — the breaking of fast during the Islamic holy month of Ramadan. The members of the Khan family are all eagerly standing around the dining table in anticipation of the moment when they can sit down and sink their teeth into the feast that’s been thoughtfully placed before them.

Saheda Khan and daughter Taharath have been prepping all afternoon, balling up the tuna kebabs, frying the piyaju (lentil fritters), and slow-cooking the lamb korma – all of which fill the family’s Warren home with the air of cardamom, curry, and chili peppers. It’s the kind of smell that hits you as soon as you walk into the house, an aroma that has you kicking off your shoes at the front door in anticipation of what’s to come.

Cell phone alarms are set to sound off the adhan, and, at about 9:15 p.m. the sunset call to prayer is heard, marking the start of Iftar – the moment everyone’s been awaiting all day: Time to eat.

The Khans are partaking in a tradition with beginnings dating back to the 7th century. And when fasting breaks for the day in metro Detroit, where the Muslim population is vast in diversity, a world of culinary traditions come alive.

The family also traces its local roots back to some of the first Bangladeshis who migrated to Detroit. Among the dining guests is Razur Rahman, who tells us his father moved to what is now known as Banglatown at the Detroit-Hamtramck border in 1966 to work for Chrysler. Back then, the neighborhood was still considered a working-class Polish community, known better for Catholic fish fries, paczki, and pierogi than biryani or chicken tikka. It wasn't until the 1970s and '80s that a small number of Bangladeshi immigrants started moving to the area, including including Saiful Khan, who’s sister is Rahman’s mother.

In 1980, Saiful Khan first settled on Carpenter, which straddles the border of Hamtramck and Detroit. He returned to his hometown of Sylhet, which sits in the northeast of Bangladesh, in 1989 and married Saheda. The two came back to the United States, where they raised children – sons Tahmeed and Shadman, and daughter Taharath. They eventually settled in Warren.

By 1990, there were about 25 to 30 Bengali families living in the area. Now, Rahman tells us, there are some 30,000 living in the region, many by way of Queens, N.Y. With that, much of Conant – from about Caniff in Hamtramck up to around Davison in Detroit – is lined with Bengali dress shops, doctor’s offices, small groceries, pharmacies, and restaurants.

The Khans and Rahman's side of the family have been involved in building the Bengali-owned community community for generations. The Khan family runs Mazza, an Indian-style restaurant in Berkley. Rahman’s father, who helped establish much of the commercial development on Conant, also helped to introduce metro Detroit to one of the most popular Banglashi sweets around – the jalebi. Also found in Pakistan, Nepal, Sri Lanka, Afghanistan, and India, the jilapi is made by deep frying dough in a pretzel-like circular shape, and then soaking it in sugary syrup. People buy them by the box from such eateries as Aladdin, Bonoful, and Kabob House & Mouchak Sweets – all in Hamtramck.

Back to that Iftar evening, we’re treated to several courses of Khan family favorites. Being from northern Bangladesh region, the cuisine for this feast is heavily influenced by eastern Indian states – many of the ingredients are sweet, and fruit is often a part of the dish. 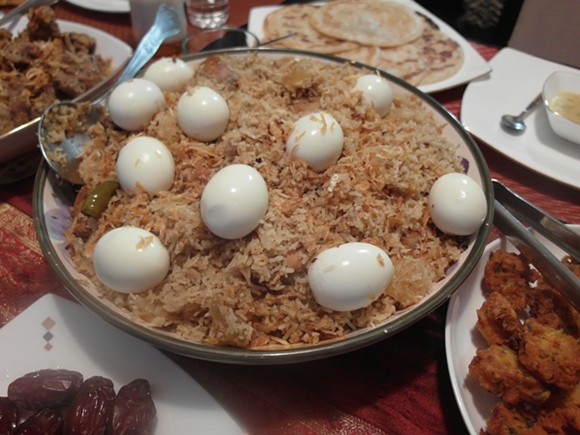 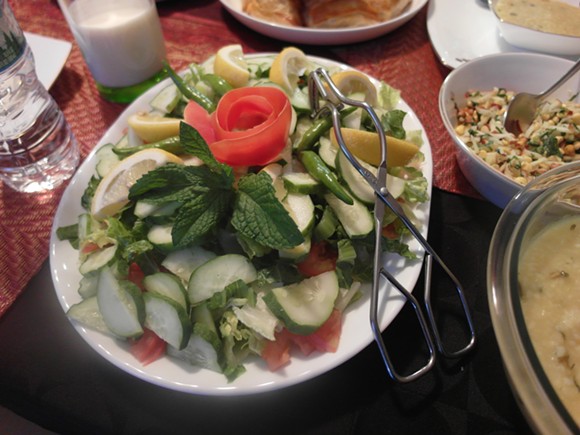 The spread is so vast we can't possibly get more than a bite full of many of the dishes. We start off small to give our stomachs a chance to adjust, a day without food or drink can be a bit of shock on the system, and too much to fast can ruin an appetite. First, a drink of water, a few sips of lassi (a slightly sweet yogurt drink), a date, followed by a small serving of rice porridge.

On to entrées, a few favorites include the lamb korma, with chunks of bone-in meat that come out tender, juicy, and with a thick gravy infused with cinnamon, cloves, yogurt, nutmeg, and sugar. We're pleasantly surprised by the bits of pineapple that give the chicken biryani a unique sweetness (the mixed rice dish is also topped with hard-boiled eggs). On the slightly spicier side are Bangladeshi-style kebabs – small, thick patties, usually made with minced beef or lamb, and deep-fried. In the Khan house, Saheda makes them with tuna or cheese and potato. The lentil fritters are light, crunchy, and addictive to munch on. 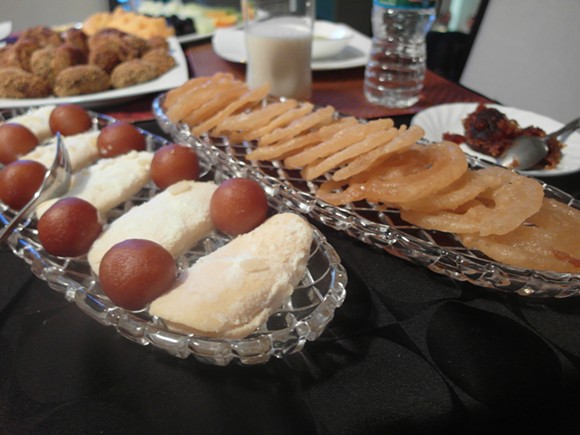 As for dessert, we nosh on several delicate sweets, including that jalebi (delightfully sticky), a rich gulab jamun balls (another popular dessert in south Asian countries), a soft cake-like chomchom dipped in rose water, and candied squash. Top it off with a glass of Bengali-style tea and the meal is complete.