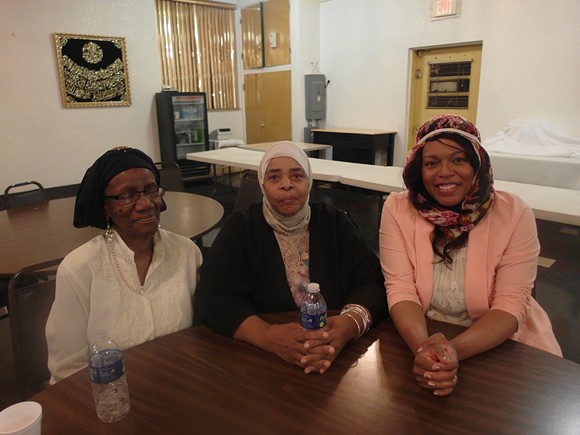 As Ramadan wrapped up earlier this week, we're continuing to share some of our experiences in covering the holy month for our Taste of Ramadan series.

In 1930, it's said that W.D. Fard arrived in Detroit, who came with a singular goal in mind: to found the Nation of Islam and help to inspire a spiritual, social, and economic awakening within the city’s African American community.

In 1934 before Fard left Detroit, he met Elijah Poole, who would later go back to the Muslim holy name, Elijah Muhammad, and lead a national movement to build mosques, schools, and businesses all over the United States.

In Detroit, the first independent Muslim school, known as Masjid Wali Muhammad formerly known as Temple #1, was formed above the Castle Theater on Hastings Street.

Temple #1 moved locations several times, until it found a permanent home in the 1950s at 11526 Linwood St., in a two-story building that used to house a Jewish community center.

It was in this west side neighborhood that Detroit’s African American Muslim community flourished, Olivia Hazziez-Shakoor tells us. Hazziez-Shakoor has been a member of the mosque her entire life, her father having worked directly with Elijah Muhammad in the earlier days.

Back then, the neighborhood bore many of the same markings as other thriving modern-day Muslim American areas in Detroit. Dress shops, halal markets, and bakeries lined Linwood – all within easy access to the mosque and catering to its members' needs. Hazziez-Shakoor says the temple was usually packed with families, so much so that the space’s large, second-level prayer room was often filled to capacity – a sign of the its strong following.

For our Taste of Ramadan coverage, we visited Masjid Wali Muhammad to find out how today’s membership observes a typical Iftar after daybreak. Much has changed over the years since the mosque's hey day. In the 1970s, following a series of controversies within the Nation of Islam, the faith was led into the mainstream Sunni denomination. The current membership is much smaller in numbers, though no less dedicated to the faith and the community, holding regular fundraisers and sponsoring a local soup kitchen. 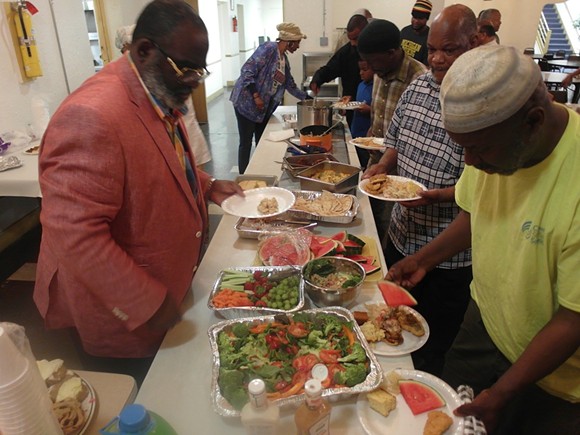 During our recent visit, Hazziez-Shakoor and a few dozen other members gathered at Masjid Wali Muhammad for the daily Iftar, potluck-style. The fare was more traditional American compared to some of the other dinners we attended – with a mix of garden salads, corn bread, fried fish, cabbage, and mac n’ cheese – but still started with the requisite date and bottle of water following evening prayer.

Though small in numbers we couldn't help to be impressed that this page in American history has held on to a sense of empowerment all these years.

Be sure to check the rest of our Taste of Ramadan stories (and stay tuned for our upcoming Eid celebration coverage):
A brief intro to the tradition of Iftar
Meet one of Banglatown's earliest Muslim families
Fasting and running, the ultimate cleanse