Detroit square pizza is part of the foundation of our local food culture. Its crispy, caramelized cheesy corners. Its dense, yet airy dough. The sauce ladled over the cheese. It's a regional favorite that until recently hasn't caught much fanfare outside of southeast Michigan.

That's changed some as of late, with niche square pizzerias popping up in unexpected places. Earlier this year, Emmy Squared opened its doors, with a menu introducing Brooklynites to the ubiquitous Motown classic.

Husband and wife proprietors Matt and Emily Hyland had already owned the successful Emily in nearby Clinton Hill, which featured a wood-fired, hybrid Napoleon/New York pie. With Emmy Squared, the idea initially was to come up with a more nostalgic, casual spot with that Napoleon-style inspiration, Matt Hyland, who's also the chef, tells us.

Months of research online led the couple to those crispy, cheesy corners that make up a Detroit square and soon they were having Buddy's shipped to NY so they could attempt to capture the essence of the Motor City dish.

Since its opening in April, the Hyland's concept has caught national attention, with some food writers skeptical about yet another outside pie encroaching on the New York slice's territory, and others pointing out the eatery's ability to bring a piece of the Midwest to hungry expats.

On a recent trip to the Big Apple, we cabbed it to Williamsburg in Brooklyn (because of course that's where this is) to see what the fuss was all about. Tucked away in a 1,200-square-foot space on Grand Street, the spot seats about 50 and is simply, yet elegantly designed. Dark wood tabletops and seating are contrasted by brick walls and a long, white marble bar. So, not exactly that old-school, '70s motif you might be more familiar with back home.

As for the pizza, there are several selections from which to choose, including the classic consisting of just sauce and mozzarella, a Margarita with burrata, the old-fashioned pepperoni-heavy Roni Supreme, and the Lou-Wow with spicy pineapple and ham.

We went for a classic and what we found was a formidable rendition, with variations that give Emmy Squared its own unique brand. First off, it's without a doubt much lighter than what you might find at Buddy's. The dough resembles more of a dense focaccia bread, just strong enough to handle the sauce and the cheese. The sauce is decidedly more "New Yorky," as Hyland describes it, not as thick as the familiar Detroit sauce. Evenly drizzled on top of the cheese and dough, it's garlicky, has a touch of oregano, and is a little sweet, just like the sauce found on NY slices. The cheese, it's baked thoroughly on top of the dough and gives of a nicely sharp kick in the crusty corners. 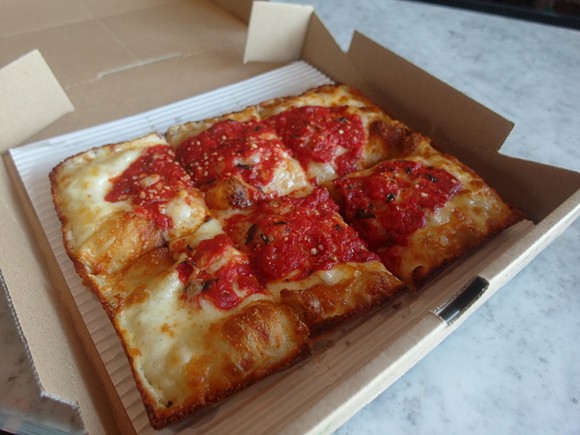 What's most striking about Emmy Squared is that the Hylands have not yet been to Detroit. Matt Hyland tells us he first started hearing about Detroit pizza by reading pieces about it by food writer/pizzeria owner Adam Kuban, who penned thousands of articles about pizza in the defunct Serious Eats column, Slice. Originally from the Midwest, Kuban had taken particular interest in documenting the uniquely Detroit style and that's what got the Hylands intent on learning more about the technique. We're told that the duo are planning a Detroit pizza tour sometime this fall so they can get a richer understanding of how the locals do it.

Of course, Emmy Squared is not the first spot to take a crack at Detroit pizza. Back in 2011,  we heard about Via 313, an Austin, Texas pizzeria founded by two native Detroit brothers who longed for the cheesy square satisfaction they left behind. And also this year, Los Angeles chefs Alvin Cailan and Isa Fabro have recently begun slanging squares in the restaurant incubator, Unit 120 in that city's Chinatown.

Whether these new outposts are simply appropriating a part of Detroit's food legacy is up for debate. Hyland tells us that so far, New Yorkers have been embracing their fare, while Michigan natives have expressed gratitude for its arrival. One thing is clear, as long as they're pan baked, got those tasty corners, and continue to properly attribute the square's origins, we're fine by these developments.

If you're ever in NYC, you can find Emmy Squared at 364 Grand St.