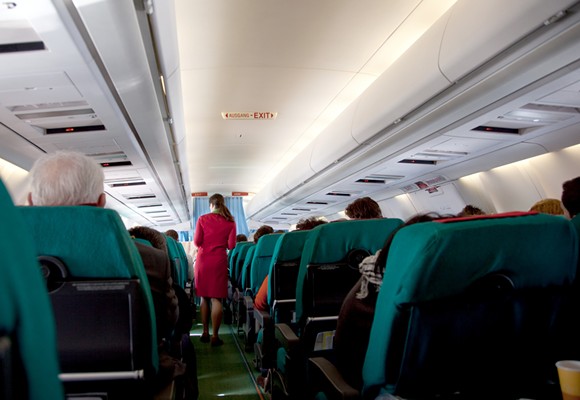 As per deeply held religious beliefs, Muslims are forbidden from consuming alcohol. That proscription extends beyond simply imbibing though. Serving it is not allowed either.

Which is why when a flight attendant who, while on the job at ExpressJet Airlines, had converted to the Islamic faith, her supervisor worked out a deal that would accommodate her faith so she wouldn't have to serve booze during flights.

According to a federal lawsuit filed last week in U.S. District Court for the Eastern District of Michigan, ExpressJet reneged on its accommodations for said flight attendant, Charee Stanley, and instead placed her on one year's leave.

The lawsuit, filed on Stanley's behalf by the Michigan chapter of the Council on American-Islamic Relations (CAIR-MI), alleges that the Atlanta-based airliner violated Title VII of the Civil Rights Act of 1964.

Court documents show that Stanley, a former resident of Michigan, started working with ExpressJet in 2013, after which time she had converted to Islam.

CAIR-MI executive director Dawud Walid tells us that following Stanley's religious conversion she learned that Muslims are forbidden from promoting or profiting from alcohol consumption. She approached her supervisor, who suggested that when a passenger order a stiff drink, she summons a fellow flight attendant to serve it.

"The reasonable accommodation was working quite well," Walid tells us.

That is, until Stanley, a former resident of Michigan, switched flight attendant partners. That second colleague complained about the arrangement and Stanley was subsequently placed on administrative leave for 12 months on Aug. 25, 2015. After that period, her employment could be administratively terminated, CAIR-MI says.

“Employers are obligated to provide reasonable accommodations of the religious beliefs of their employees,” CAIR-MI Legal Director Lena Masri said in a written statement. “ExpressJet wrongfully revoked the religious accommodation it directed Ms. Stanley to follow, and retaliated against her for following it by wrongfully suspending her employment.”

Walid tells us workplace discrimination within the hospitality industry is brought to CAIR-MI's attention on occasion. The civil rights organization recently assisted a woman who was harassed on the job for wearing a hijab. He says the issue tends to be unique to recent converts.

In a prepared statement, ExpressJet says: "Regarding Ms. Stanley, we embrace and respect the values of all of our team members. We are an equal opportunity employer with a long history of diversity in our workforce. As Ms. Stanley is an employee, we are not able to comment on personnel matters nor can we comment at this time on any ongoing litigation."

Stanley's one-year suspension is up next week (Aug. 25). Whether she will return to work (and/or forced to take cocktail orders) is now in the hands of the court.