Six places to eat and drink this Labor Day Weekend

September 02, 2016 at 3:33 PM
comment
Labor Day weekend marks the unofficial end of summer. Time for that last backyard cookout, picnic at Belle Isle, or to hit up the many festivals taking place (see our handy Festival Guide on newsstands now!). If you still don't have you itinerary planned out, we've hand picked six spots - some new, some old standbys - where you should be eating and drinking this long weekend.

Securing a seat on the outdoor patio here pretty much guarantees a chill afternoon or evening with a rotation of live/DJ music sets and pours of your favorite vino on the ready. This weekend, it's no different. Today (Sept. 2) is the Rocksteady Disco Happy patio party with Peter Croce (6 p.m.), followed by The Damon Warmack quartet. Sunday, the wine bar will charge a rare cover ($15 presale, $20 at the door) to see legendary House DJ/producer Ron Trent. Show starts at 5 p.m., with opening sets by Monty Luke and Peter Croce.

It's got "Eats" in the title, so you know there will be plenty to chow on. There will be more than 30 eateries to from which to choose while you're perusing the art on display or while jamming out to Joan Jett and the Blackhearts (8 p.m. Friday), Flint Eastwood (5:15 p.m. Sunday), or Laith Al-Saadi (10:45 p.m. Sunday). We recommend hitting up Yuzu Sushi Co. for a sushirito, La Dulce or Spanish tapas, or Woodpile BBQ Shack or brisket. 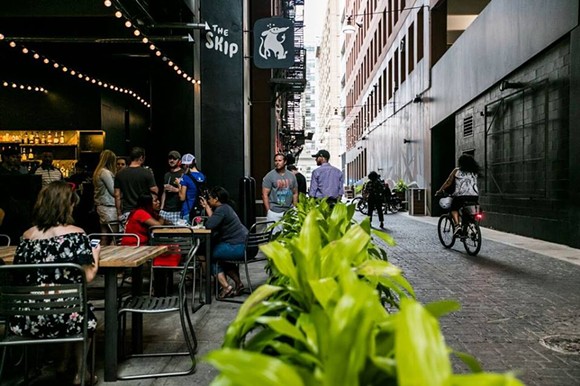 Drinking in a mural laden alley feels so... Detroit (even if it is in the midst of Gilbertville). That controlled chaotic feel can be had at the open-air The Skip bar, where you can sip on frozen cocktails and marvel at spectacular street art by the likes of Shepard Fairey. Speaking of which, Fairey co-founded the Make America Smart Again voting initiative, which will host a screening of the satirical film, Idiocracy, at 7 p.m. Saturday at the bar. The Mike Judge comedy touches on the rise of commercialism. Sticking it the man whilst sipping frozen pina coladas, what a combo.

You heard the news that this 33-year-old institution would be closing its doors come Sunday. Why not say adios by stopping in one last time for a taco platter, a margarita, and a shot of one the spot's 100+ tequilas - all from the gorgeous outdoor patio out back.

Hamtramckans, both former and current, count down the days 'til the annual Labor Day Festival hits Joseph Campau (Saturday-Monday), and for good reason. Not only is there a ton to d0 (take in the full lineup of bands, shop for handcrafted goods, ride the rides), but there's also lots to eat. Sure, you're bound to dig into some Polish or classic carnival fare, but this year there are also a number of newcomers to sample. They will be ribs from Bert's Belle Isle cart (the same Bert's from Eastern Market), Nick's Concessions (Greek food), and the Grillwich Tot Stop food truck, which deals in loaded tater tots.

Nearly 50 area restaurants are preparing traditional Spaghetti all'Amatriciana through the month of September as part of a campaign to raise money for earthquake ravaged central Italy. For $15, you get a plate of this famous pasta (regional to the town of Amatrice) and all proceeds go to rebuilding efforts. Click here for a full list of participating eateries. We recommend hitting up Bacco Ristorante in Southfield, where chef Luciano DelSignore's crew will whip you up a plate.