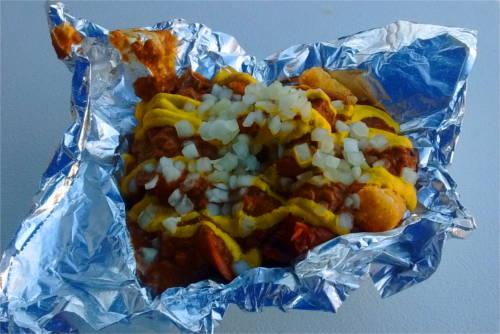 We had heard about this one even before the Hamtramck Labor Day Fair opened up: Somebody had taken the concept of "totchos" — a dish in which that longtime cafeteria staple Tater Tots stand in for corn chips — to new heights. They offered not just totchos but a dish that turned Detroit's classic coney island hot dog inside out, and replaced the steamed bun with the starchy potato nuggets.

It's called Super Coney Tots, and we got it yesterday from a guy named Phillip running a cart in front of the old Rock City Eatery on Joseph Campau. It's hot dog pie, with cut sections of frankfurter, Tater Tots, chili, diced onion, and yellow mustard. While we were eating the thing, we wondered why nobody had ever tried this before.

There's still a day left to get these creations, but we wouldn't be surprised if we saw these things offered somewhere else soon.