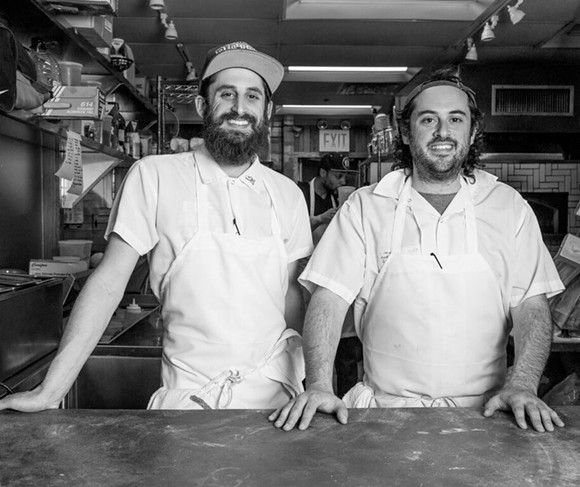 It's becoming a familiar story: Boy grows up in metro Detroit, moves away to the "big city," becomes a famous chef, and then returns home to join in the city's "exploding" restaurant scene.

In this case, we're talking about brothers Max and Eli Sussman of Huntington Woods, who've racked up quite the resume cooking in NYC kitchens (Max at April Bloomfield's Breslin Bar & Dining Room and Roberta's, and prior at eve in Ann Arbor; Eli at Mile End).

The duo have returned to the Motor City to tinker with their Middle Eastern-inspired concept, Samesa, through a series of pop-ups at Detroit City Distillery while they work on opening a brick and mortar spot in Brooklyn.

"Being in Eastern Market is very exciting to me," says Max. "It's a place that is not only historically all about food, but continues to be a place where the entire community comes together and interacts with farmers, chefs, and purveyors."

The brothers have become darlings in NY food media, with Max named one of Forbes' 30 Under 30 food and wine stars and a James Beard nominee for Rising Star Chef, while Eli was declared both a Zagat's 30 Under 30 and one of the top 50 food professionals in Eater.

The two have also penned two cookbooks, This is a Cookbook and The Best Cookbook Ever.

A New York Times Style Magazine story followed the Sussmans on a trip to Detroit last year, where they ventured to their favorite hometown dives, including American Coney Island and Pita Café in Oak Park, which they called is the "gold standard" in shawarma.

The Sussman culinary odyssey follows those of a number of other notable metro Detroit chefs who are currently making waves on the scene. Kate Williams (at the soon-to-open Lady of the House), Brendon Edwards (formerly of Standby), and veteran Chicago chefs John Vermiglio and Josef Giacomino (Grey Ghost) all have spent time making their names elsewhere before taking roots back in their hometown.