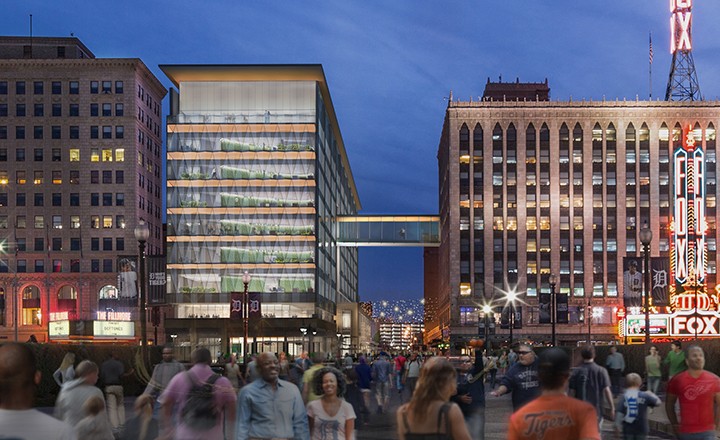 Today is the day that ground breaks for the Little Caesars Enterprises Inc.'s expanded world headquarters.

Crains Detroit reports that plans for the 234,000-square-foot Little Caesars Global Resource Center include a façade made of glass that's appropriately shaped like pizza slice triangles.

The nine-story building on Woodward at Columbia Street marks the first major construction to come to downtown since the Compuware Building was built in 2002. The new structure will be connected by a pedestrian bridge to the pizza chain's existing headquarters inside the Fox Office Center.

The new headquarters is part of the overall District Detroit project centered around the tax-payer subsidized Little Caesars Arena (read our 2014 cover, How Mike Ilitch scored a new Red Wings arena). The project is spearheaded by Olympia Development of Michigan (the development arm of Ilitch Holdings, Inc.).

The cost for the headquarters expansion is estimated at $150 million. Leading the project will be Brinker-Christman and SmithGroupJJR. Construction is supposed to be completed by 2018.

We caught a glimpse of just what the new headquarters will look like on the District Detroit website (see above). We'll keep you posted with more images of that pizza slice façade as they become available to us.