Side Dish: Meet the women behind The Farmer's Hand in Corktown 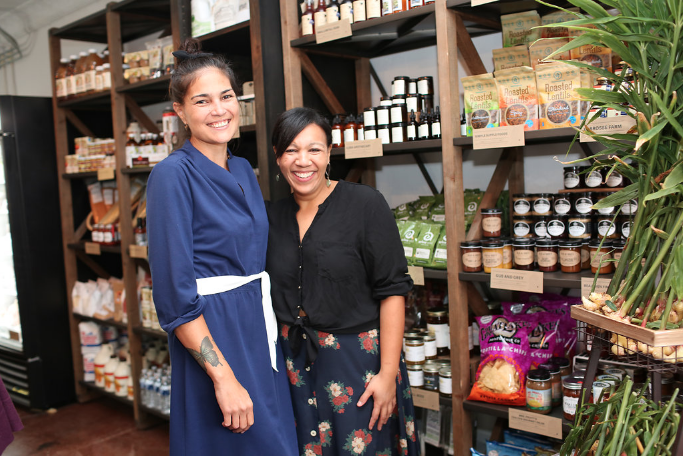 Just a few short weeks ago Rohani Foulkes and Kiki Louya realized a years-long dream when they opened The Farmer’s Hand in Corktown.

The unique shop is part corner store, part farmer’s market, and part café with all of its products sourced from Michigan. For the business partners, who both share backgrounds in the restaurant and non-profit worlds, it combines their love of good food, their desire to bring healthy options, and to support local farmers and makers.

The two describe their partnership as serendipitous. They had been independently but simultaneously researching starting such a venture a few years ago. They kept coming into contact with the same farmers and distributors who eventually suggested the two meet.

Foulkes, a native of the Australian seaside town of Cairns, grew up accustomed to being able to walk to the nearby corner market for her everyday needs. When she moved to Detroit, she had a hard time grasping the idea that such amenities weren’t as easily available.

As for Louya, she was raised in Detroit’s Rosedale Park neighborhood to Congolese and South American heritage. She had worked a number of jobs in the hospitality industry (bartender, barista, cook, baker, server, etc.), and eventually started exploring food systems in terms of access to healthy food.

We asked the two entrepreneurs their thoughts on the local food scene. They’ve split up their responses in half.

Metro Times: What is one thing people don’t know about you that you wish they did?
Rohani Foulkes: My name is Arabic and means spiritual woman.

MT: What daily ritual is non-negotiable for you?
RF: Eating breakfast.

MT: If you could have any superpower, what would it be?
RF: Teleportation... I miss Australia and the beach sometimes!

MT: What is the most positive thing in food or drink that you’ve noticed in Detroit over the past year?
RF: Diversification of ethnic offerings.

MT: Who is your Detroit food crush?
RF: Warda Patisserie.

MT: Which ingredient is most representative of your personality?
Kiki Louya: Cilantro. I'm a lot of fun, but there's always those one or two people with which I will never get along.

MT: If you weren’t working in the restaurant business, what would you be doing?
KL: Trying to find my way back, as I've done so many times over.

MT: Name an ingredient never allowed in your kitchen.
KL: Anything bottled that can be easily (and cheaply) made by hand.

MT: What is your after-work hangout?
KL: My bathtub.

MT: What’s your food or beverage guilty pleasure?
KL: Pickled ginger. I eat it like candy.

MT: What would be your last meal on earth?
KL: Burger and duck fat fries from Au Cheval in Chicago followed by two fingers of good whiskey.

See also: Side Dish: Chef Maxcel Hardy to return to his beloved Detroit

See also: Side Dish: Katoi's Courtney Henriette on what keeps her grounded while running the mothership