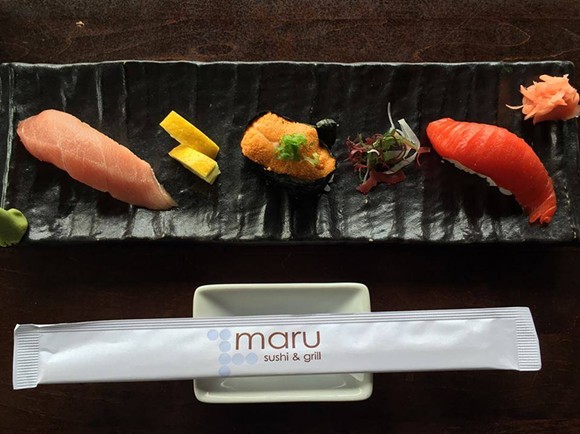 It's about that time to plan your dining options for the week, and with a steady stream of restaurants opening, you've got some new options to throw into the rotation.

First up, Maru Sushi, a Michigan-based chain, which made its soft opening on Friday inside the Federal Reserve Building (160 W. Fort St.).

The Detroit News reports that among its specialties is an express lunch menu, featuring two rolls and choice of soup or salad for $14. For those who are squeamish about fish, there's a number of grilled lunch entrees as well, including a teriyaki chicken, ribeye with miso butter, and hibachi veggies ($16-$26).

The after-work crowd can also check out the spot's craft cocktails, sake, and "gourmet soft drinks," the daily says.

Elsewhere in the Grandmont Rosedale neighborhood, Always Brewing Detroit is reopening (Nov. 15), after a new buyer took over ownership of the coffee shop.

Eater Detroit reports that owner Amanda Brewington announced plans to close the café in September, with her hinting it hadn't drummed up enough momentum to stay open.

Since then, Cody Williams has stepped up to take over. He tells the website that he will make some minor changes around the shop, but that customers can expect much of the same products it carried under the previous ownership.

Over in Birmingham, two growing, local chains are arriving, including downtown Detroit-based 7 Greens salad eatery, now open at 344 Hamilton, and Royal Oak-based Love and Buttercream, made its debut Nov. 9 at 746 E. Maple.