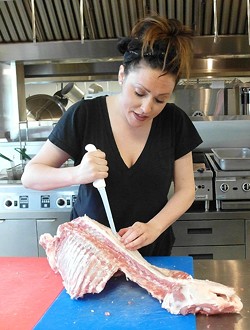 The rumors are true: Chef Kate Williams' much anticipated restaurant Lady of the House is going to take over the space that formerly housed St. Cece's Pub.

Williams first became interested in the Corktown watering hole back in May when it became evident that the property she was hoping to rehab - Willie's garage - was no longer a viable option.

"It felt really good in there," Williams tells of the warm vibe she felt when she checked out the spot with one of her silent business partners.

It's that cozy feeling that had made St. Cece's a popular neighborhood bar and restaurant. In addition to its own creative menu, it had become a destination for aspiring chefs, who used the kitchen for weekly pop-up dining events.

The space went on the market in January, listed for $850,000 by O'Connor Real Estate. After months of consideration (and a bit of nudging when word got out that out-of-state investors were interested in the property), Williams' silent backers purchased the place for $770,000 in November.

Come spring in its newest iteration, Lady of the House will focus on the same nose-to-tail butchery she was known for when she opened Republic, as well as ingredients sourced from local urban farms, and Williams' Irish heritage.

Heading the bar, Williams tells us that a well-known bartender from somewhere "really swanky" will join her team (she wouldn't name names quite yet). As for the bar itself, design will done by Patrick Thompson Design (who's also designing the Livernois Tap in Ferndale). Williams says she'll make cosmetic changes, including replacing the old-school stained glass windows to give the place an even warmer feel.

"It's got great bones," Williams says.

We first met Williams in 2014 as she was gearing up to open Republic in the GAR building on Grand River. That was her second experience opening a Detroit eatery as executive chef. Prior to that, she had worked at Rodin in Midtown (the now-shuttered French-inspired restaurant owned by Torya Blanchard), had spent stints working in Chicago and Copenhagen, and graduated from the International Culinary Center in NYC.

After departing from Republic shortly after its 2015 opening, Williams began working on her Lady of the House concept, first by hosting a series of pop-up dinners at Eastern Market.