We stopped in at Green Dot Stables over the weekend and couldn't help but be impressed by the crowds.

Five years in business, fans are still willing to wait in long lines for the spot's famous gourmet sliders. Similar things can be said of one of its sister restaurants, Johnny Noodle King, that's equally embraced for its unique takes on ramen and other meals in a bowl.

That sort of excitement is missing at Huron Room.

The third eatery under the InLaws Hospitality group (headed by restauranteurs Jacques and Christine Driscoll and chef Les Molnar) has been open in Mexicantown just over a year and has yet to resonate with diners in the same way.

"That's something we ask ourselves a lot too," Driscoll tells us when asked why he thinks the momentum at Huron Room hasn't met that of his other eateries. "The restaurant business is finicky, it's not an easy question to answer."

Unlike the simplicity of Green Dot and JNK, the menu and space at Huron Room feel in conflict with each other. It's trying to be too many things at once: locally-sourced, chef driven, yet old-school Up North fish 'n chips house. Sleek and modern in design, yet aspiring to be that kitschy corner bar (with a heavy emphasis on Michigan craft beers, wine, and spirits).

The Driscolls and Molnar are trying to reconcile this with a revamped menu and are slowly adding homey touches to the place to make it feel more comfy.

There's still much remaining on the Made-in-Michigan front, but there's more of a "stick-to-your-ribs" vibe, like its Polish-style city chicken, Jaq's Moosehead Chili, cans of domestic beers, and crab and lobster stadium nachos (and still playful entrees that Molnar is known for, like a fried fish curry that plays off the Brits love for fish and chips and Indian food).

UPDATE: We should note, too, that prices on several of the new menu items are a tad lower than previous offerings. For instance, the burger, which had been a big seller during weekday happy hour, is now available at $7 anytime. Happy hour also remains part of the program, with $1 for select beers and snacks. 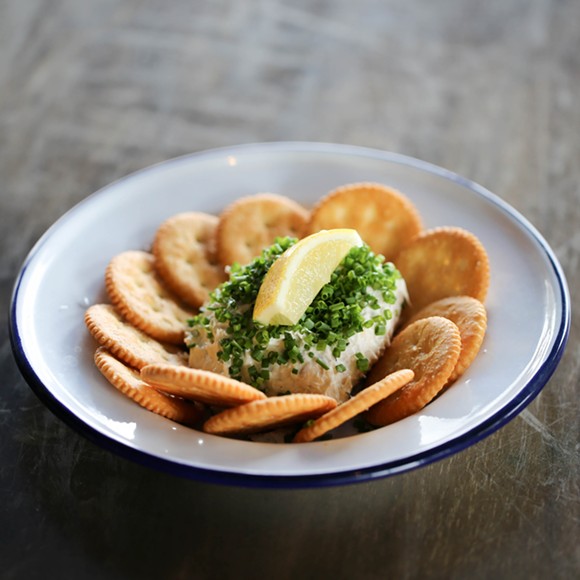 The sleek interior (it took the Driscolls the better part of two years to renovate the former abandoned party store) has been accented with the type of kitschy décor one might expect in a dive bar, such as an old boar's head that's been mounted behind the bar.

That Driscoll and co. are taking a step back to retool is smart.

A lot of the new eateries opening these days are trying too hard to fit into a box that appeals to the "New Detroit" palate. Truth is, not every new place can or should be a Selden Standard or a Katoi - seeped in intriguing back stories of urban renewal or the celebrated chef's winding journey to culinary excellence.

A neighborhood spot, which is what Huron Room is, exists for the enjoyment of regulars, who come back for unmistakably comforting food. That's what have worked at Green Dot and Johnny Noodle King. Hopefully, this updated menu will be what it takes for Huron Room to get its groove.

Here, have a peek at the new menu.