Effects of the gluten-free bandwagon 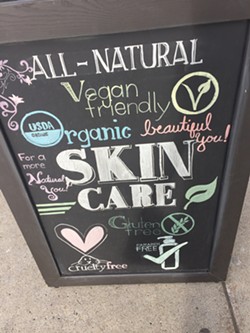 How does a celiac sufferer feel about the millions of faddists who have neither celiac disease nor gluten sensitivity but who’ve jumped on the gluten-free bandwagon?

Marie Hjermstad, who grew up eating pizza, cookies, and all things glutenous on Detroit’s east side, was diagnosed with celiac disease at 27.

On the one hand, she’s thrilled that high demand has made so many palatable products accessible.

“I’m told that 15 years ago there was nothing but cardboard available,” she says, “so it is nice that I can go to a grocery store and find a variety of options.”

But the frustrating part happens when restaurants assume that demanders of gluten-free meals aren’t serious, so they think it’s OK to get sloppy.

“Maybe they had a customer a couple days ago that made a big stink about their meal being gluten-free — but then they ordered a beer,” Hjermstad says. (There actually exist beers that call themselves “gluten-reduced” — the worst of both worlds.)

She’s been to pizza places and made clear she really needs her pizza to be gluten-free — and the server will admit there’s cross-contamination everywhere. In one egregious example, Domino’s offers a gluten-free crust, but its website warns it’s “prepared in a common kitchen with the risk of gluten exposure. Therefore, Domino’s DOES NOT recommend this pizza for customers with celiac disease.”

“That’s only helpful for people who don’t actually have any issues with gluten,” Hjermstad notes wryly.

“I personally try to make it clear it’s not just for fun.”

The anti-gluten bandwagon is big enough to carry all comers. Loads of skin care products are now advertised as gluten-free.

But the Celiac Society — that’s right, the people who have to be careful not to ingest even the tiniest bit of the enemy — says, gluten molecules are too large to be absorbed through the skin. The society gently reminds the reader “you may be allergic to one or more of the other ingredients.”

I’ve found beauty websites that admit the science — no absorption through the skin — but nonetheless link you to a range of expensive gluten-free lotions.
If you need to avoid gluten, go gluten-free for lipstick and toothpaste.

The story’s different for medicines — some do in fact contain gluten, and the FDA doesn’t require the packaging to disclose it.

See also: Gluten-mania: Dispelling the myths behind a food fad