Isis Damil's voice is reason enough to visit Baker's Keyboard Lounge on Tuesday afternoons when the Detroit-based jazz vocalist takes the stage between noon and 3 p.m.

In her third year of performing the weekly lunchtime set, Damil has hit her stride. She runs through sets of originals and jazz standards with her confident, powerful voice, and first class intonation and range.

And the performance is a family affair. Her dad, Detroit jazz legend Zion Yisrael, joins Damil on keyboards, while her mom, Mecca Lathan, also sometimes jumps in on sax.

While Damil's performance is jazz at heart, her work is a mix of styles, and she describes her first album, 2015's Higher Standard, as "Jazz fusion." Indeed, the elements of R&B, blues, scat, and more aren't hard to detect, though Damil sums it all up as "happy, feel good music" that's more accessible to younger people than straight up jazz. A second album, Civil Love, is in the works for 2017.


While the music is worth the visit, let's not forget this is jazz lunch, and Damil and family are kind enough to share the spotlight with with Baker's glorious soul food dishes - perfectly breaded and seasoned catfish, BBQ ribs, chicken wings, the best dressing and gravy in Detroit, and much more. 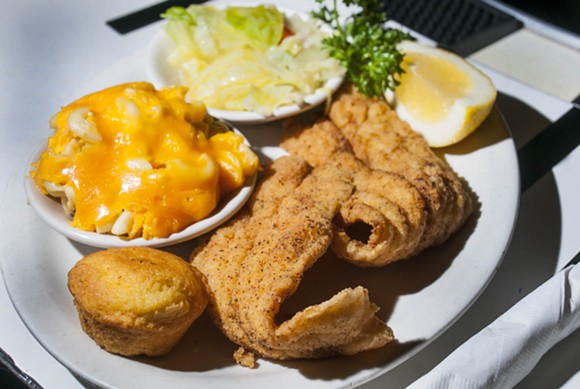 We visited Baker's on a recent Tuesday afternoon to try the food and catch a performance. Damil gave us her thoughts on being a young jazz performer in Detroit and performing on the same stage as legends like Miles Davis, Ella Fitzgerald, and Sarah Vaughan.

(A slideshow of the performance and Baker's dishes is here.)

On falling in love with jazz.

"Growing up, I didn’t like it because I thought it was too busy, but now, when I'm listening to jazz, I'm like 'Whoa, this is pretty creative.' I compare it to what we hear on the radio today ... and I don’t want to call all music on the radio today 'simple', but it's definitely not as complex as jazz. There are so many layers of creativity, and that’s why I got back into it. Jazz is limitless."

On making jazz accessible to a younger audience.

“People my age don’t listen to jazz, so I’m kind of the oddball out of my peers. What I’m doing is taking jazz and putting a contemporary spin or a newer feel on it so my generation can listen to it and say ‘Wow this is pretty cool, where did you get that from?’ And I can tell them 'That's a jazz standard by Ella Fitzgerald.' On Detroit’s influence her sound.

"Detroit has its own kind of rugged feel and sound, and I think any artist who comes from Detroit has that kind of raw sound that’s so authentic. When you go to other places, people say, ‘Oh man, where are you from? You’re not from here.’ They know right away because there’s a different sound, and it’s that Detroit sound. You recognize it if you are from Detroit."


On her faith’s influence on her music.

"It influences me in a positive way. My music isn’t necessarily religious, but it's spiritual, so it's always going to portray a positive message, and we need more positivity.

"There are so many things out there in the world, so tying in my faith and my beliefs, and my positivity, good morals, and values, I try to ... get that in my music. I want people to say 'I know I can listen to Isis Damil's music and feel good about it afterward.'" On working and playing with her dad.

"He’s my dad and who else knows you better than a parent, so on the (stage) or in life, I don’t have to stress out about things, or as far as him knowing where I'm going in a song. Jazz is so impromptu  ... but he’s prepared for it. We have have each others' back and I wouldn't replace that relationship for anything in the world, on the stage and off the stage."

On her favorite dishes at Baker's.

Damil's newest single, I love You, is available on iTunes, and a clip of a recent performance is here.