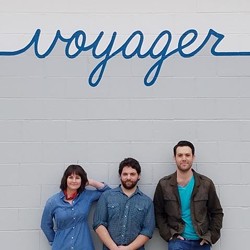 Ferndale's Voyager, a seafood and raw bar expected to open sometime in March, announced via press release that it has brought aboard new chefs.

Chef Marc Bogoff appears to be out, while owner Eli Boyer hired Chicago-based chefs Justin Tootla and Jennifer Jackson to replace him.

The pair recently relocated to Michigan after consulting, traveling, and hosting a number of pop-ups in the Midwest, according to the release, and their previous career highlights include opening Logan Square’s Thank You Chinese. They also worked at the Chicago seafood-focused supper club, Kinmont.

When Voyager opens, guests can expect to find seafood "sourced from the Great Lakes region along with wild-caught, responsibly farmed, and sustainable seafood options." Plans also include regular oyster education and pairing events.