An exploration of Hamtramck's sweet side, from chom chom to cake cups 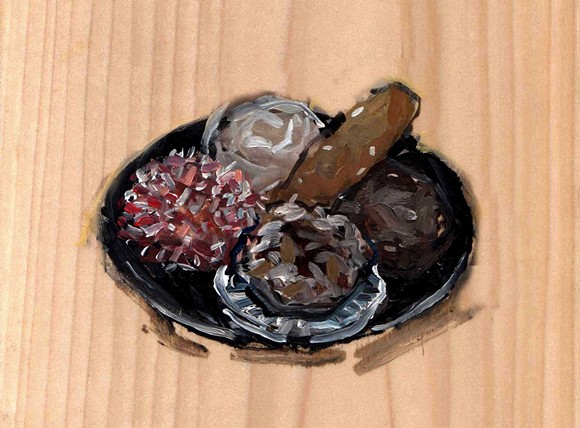 Metro Detroit knows all about the savory side of Hamtramck, but — with the exception of the famed paczki — the sweeter half of its menus are sometimes an afterthought, or not really known beyond the city’s borders. However, the sugary, syrupy sweets of Aladdin; the excessive but addictive cake cup at Mocha Cafe; the imaginative pies at Gingersnap; and other Hamtown desserts all deserve to share the stage with the paczek.

We checked out some of the city’s best sweets, and enlisted painter of all things Hamtramck, Emily Jane Wood, to provide the visuals. (In no way is this a complete list!)

The minimal-in-appearance gulab jamun, rosgulla, and chom chom are the bases of the Bangladeshi sweets family, and the plain, small brown or white balls' looks are deceiving. Even before the chefs dress them up, the morsels of milk cheese, or carnation milk and biscuit mix, are already lively and super sweet. After a dip in boiling sugar oil, gulab jamun is left with a taste not dissimilar to some of the sugary fried desserts one might pursue at the carnival. The rosgulla also receives the sugar syrup treatment, but is the superior of the two as the cheese provides a little more depth in flavor and consistency.

However, they're even more exciting when Aladdin's cooks add new dimensions by powdering, rolling, molding, and/or soaking them in various trimmings. For example, the special gulab jamon is dusted in powder sugar, while the pink and white chom choms are rolled in sugar and coconut flakes. Take the sweets with a cup of Aladdin's chai tea, which owner Tipu Uddin claims is the best in the world. His case is strong.

Uddin tells me that the sweets are a must at all Bangladeshi celebrations, like weddings or Ramadan: “If anybody goes to friends’ houses for a celebration, you have to have these, or nobody is happy.” 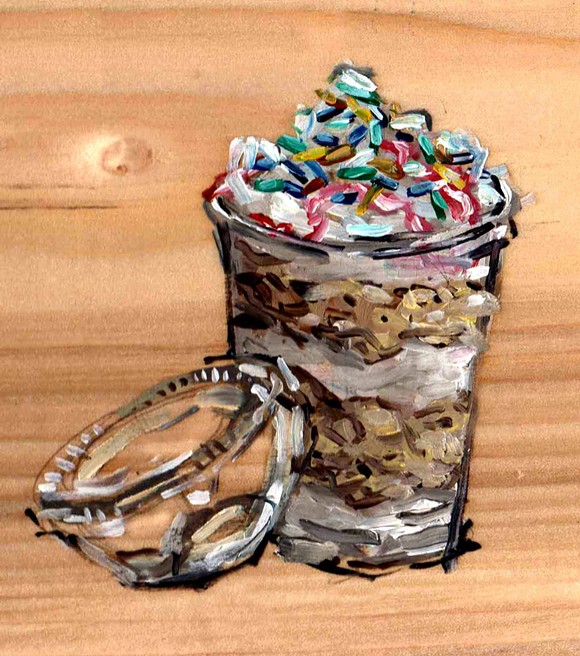 Children of the 1980s will recall the tall stacked sandwiches that Scooby Doo and Shaggy prepared after downing Scooby snacks. Every meat, cheese, veggie, condiment, and whatever else in the fridge landed between two buns to create a cartoonishly wild sandwich. Mocha Cafe's cake cups, which practically vibrate with sugary energy, could be viewed as the dessert equivalent. Different varieties of cakes, M&M’s, Oreos, Reese’s Peanut Butter Cups, syrups, sprinkles, balls, cookies, and anything else from the candy aisle are packd in clear, 16-ounce cups amid drifts of frosting to create a sugar bomb. It's a go-to. 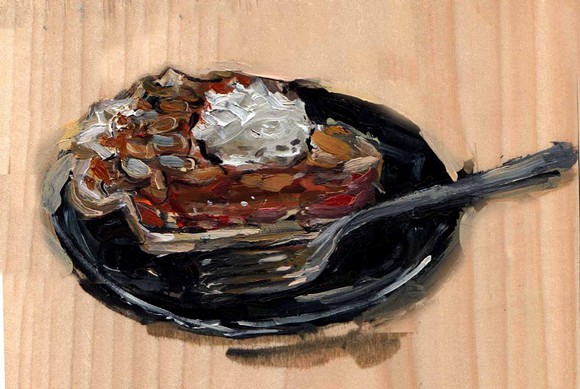 Carrot and Chai Pie from the Gingersnap pop up

Summer Radtke’s Sunday night Gingersnap pop up at Baker Streetcar is the only Hamtown pop up that offers weekly dessert in the form of pie, and her great strengths as a piemaker are her creative recipes and crusts. While Radtke inherited skills from her mom, mastery of the latter is the result of years of practice and experimentation to develop what she accurately describes as a “flaky, melt-in-your-mouth” crust. Such it was in last week’s mildly sweet and spicy carrot and chai pie that’s ringed with toasted almonds, then crowned with a healthy portion of whipped cream. Other pies in the Gingersnap repertoire include Mexican Chocolate Coconut Cream, Grapefruit, Beet with Honey Goat Cheese Whip, and, this weekend's special, Fig Bourbon Pecan.

Everyone in town knows Euro Market for its flaky burek and Bosnian breads, but don't forget to put some of owner Gina Sinadinovski's cookies and baklava in your basket on the next burek run. Try the crumbly lokum, which is packed with ground nuts and coconut, then dusted with powdered sugar. Or the shapa (Bosnian for "bear claw"), a cookie similar in texture to the lokum, but made with ground walnuts. The baklava and other traditional Bosnian desserts are available, but usually need to be preordered. 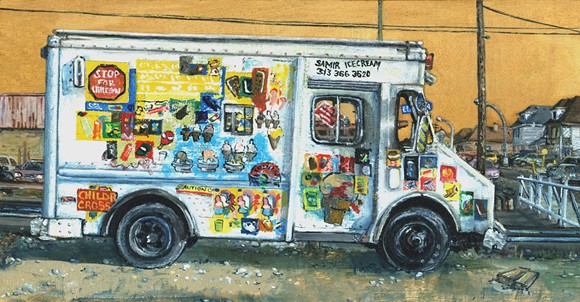 If there’s an unofficial city song, it’s the Hamtramck hip hop ice cream truck version of “She’ll Be Comin’ ‘Round The Mountain” that blares from the fleet of trucks rolling up and down our streets through the warmer months. Their drivers (along with Burk's Igloo) peddle the stuff that satisfy the kids’ collective summertime sweet tooth — soft serve cones, and ice cream truck standards like Push Pops, Strawberry Shortcake bars, Bomb Pops, chocolate chip cookie ice cream sandwiches, Choco Tacos, and so on. But even more interesting are the trucks’ wild paint jobs with homemade renditions of Sponge Bob, Sonic the Hedgehog, The Simpsons, palm trees, or cool kids with shades eating soft serve cones.

Fattah from Yemen Café Yemen Cafe's take on fattah is analogous to the date bar, but before it arrives at the table, the sweet layers of fruit, Yemeni bread, and honey are the recipient of a heavy ladling of sweet cream and more honey. A Yemen Cafe employee tells me their fattah is made with a special, one-of-a-kind date that's difficult to find, but he wouldn't reveal anything more. I grumbled at the $6.99 price tag, then discovered that Yemen Cafe gives you an entire tray for the cost, so be sure to bring the gang when it's time to satisfy your fattah tooth.

There's so much to love about Bon Bon Bon, and it's hard to keep up with all the exciting directions owner Alexandra Clark, the Detroit food paparazzi's favorite subject, is taking her expanding chocolate empire. She launched in a cozy Evaline Street shop three years ago, and is already preparing to move the business and its 14 employees into a much bigger space at Caniff and Jos Campau.

Beyond that, Detroit artist/performance weirdo Jimbo Easter will paint a mural inside Bon Bon Bon's downtown storefront in the Chrysler House. It's sure to be bonkers and unlike anything else down there. Clark also recently partnered with Batch Brewing to develop a dessert-inspired beer, "Tres Bon," and you'll now find a taste of Bon Bon Bon in Shake Shack's frozen custard concretes.

And, of course, paczki

We just finished that party last week, but for those of you who missed, paczki are often described as Poland’s version of the jelly donut. However, there are important distinctions. It should be noted that traditional paczki aren't pumped full of jelly, but fruit-based preserves or custard fillings. The dough differs depending on your paczki preparer, but some, like New Martha Washington Bakery, offer a lighter, spongier texture. Erica Pietrzyk of Pietrzyk Pierogi fries dough that's crispier and more solid; it feels like the preserves are encased. That's achieved with the use of lard instead of vegetable oil, and multiple roll-rise-deflate cycles that produces a stronger gluten structure with smaller air pockets for denser, less crumbly dough.

Also, bakers don't add sugar to paczki dough as is typical with jelly donuts since the preserves' sweetness and the dough's richness can carry the pastry.