Royal Oak will get more barbecue, Apparatus Room opens in May 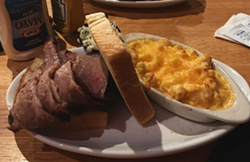 Tasso Teftsis, co-owner of Red Smoke and Astoria's Royal Oak and Greektown locations, is undertaking the project, according to the Daily Tribune. The new building will go up at the site of a now-demolished Citizens Bank at 218 S. Main St.

Expect all the same menu items as the downtown Red Smoke and a late 2018 opening.

In Detroit, the Apparatus room will open its 4,600-square-foot space in a former firehouse that's being renovated into a boutique hotel called Foundation, Eater reports.

An "esoteric" wine list, craft cocktails, and, during the day, a cafe serving Anthology coffee and pastries comprise the beverage program.