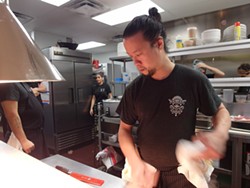 Chef Brion Wong has left The Peterboro for a new job in New York City.

"Brion and I had a very good meeting, and I said 'Godspeed, best of luck in your endeavors,' " Kwiatkowski tells the Freep. "He was graceful about it. Apparently, he's got a better job offer in New York. ... We definitely parted on really good terms."

Wong arrived in Detroit to help the kitchen at Antietam through a rocky start, leaving after less than a year. Kwiatkowski then tapped him to develop the Peterboro's concept and open the Chinese-American fusion restaurant.

Chef Joe Flores - who helped open Kwiatkowski's Wright & Co. and worked with Flowers of Vietnam and P.F. Chang's - will take over. Some menu items will remain, but Kwiatkowski says to expect a largely new menu to take shape in the coming weeks.

(An earlier version of the story reported that the Peterboro's new chef is named Dan Flores. His name is Joe Flores. The story has been corrected.)