According to the historians at American Coney Island, we mark a hallowed occasion today: the arrival of that fabled confection in Detroit with the opening of American 100 years ago. In metro Detroit, few among us don’t know that timeless creation: a frankfurter in a natural casing ensconced in a fluffy steamed bun, topped with beanless beef-heart chili, chopped white onions, and yellow mustard.

As with most popular foods, origin stories are easy to come by and hard to prove definitive. Take a look at the coney dog’s culinary ancestor, the classic hot dog: its provenance is shrouded by the mists of time, attributed to perhaps a dozen different inventors, innovators, or marketers. All one can say is that the hot dog’s genesis is clearly German, and it represents both an early American “finger food” and vies with Chinese food for first dibs on what we’d call today “fast food.”

Which is to say that few noted the rise of the frankfurter in the late 19th century because, as foods go, it was considered downmarket and unremarkable. Journalism giant H.L. Mencken was one of the few to countenance them, although he dismissed the inventions as “a cartridge filled with the sweepings of abattoirs.” But he also envisioned a time when hot dogs would be made for grander appetites, writing:

Throw off the chains of the frankfurter! There should be dogs for all appetites, all tastes, all occasions. They should come in rolls of every imaginable kind and accompanied by every sort of relish from Worcestershire sauce to chutney. The common frankfurter, with its tough roll and its smear of mustard, should be abandoned as crude and hopeless. … The hot dog should be elevated to the level of an art form.


It was no doubt intended as satirical humor, and yet much of his monologue has come true. Go anyplace in America and chances are you’ll find a regional version of the frankfurter. Yes, there’s the New York hot dog, overflowing with sauerkraut or sautéed onions. But there’s also Cleveland’s Polish boy, the Hawaiian puka dog, the Southwestern Sonoran, the dragged-through-the-garden Chicago-style hot dog, Georgian creations topped with slaw, Texas-style corn dogs, and many more. They’re artful, inventive, and employ ingredients that help tell a local story.

Vindication for hot dog lovers was a long time coming. The spotlight wasn’t cast on the frankfurter until about 20 years ago, when Pittsburgh’s Rick Sebak created the widely viewed A Hot Dog Program. The documentary zoomed in on various hot dog restaurants throughout the country, and helped contribute to a growing awareness of the depth and breadth of our frankfurter heritage. Sebak’s show, however, came nowhere near Detroit’s coney culture.

Things began to change when international media began turning their cameras on Detroit several years ago. It roughly coincided with the April 2012 release of the book Coney Detroit, a loving photographic tribute to the “coney island” restaurants that have helped keep metro Detroiters fed for generations. But the appreciation really picked up with the enlightened patronage of culinary celebrity Anthony Bourdain, who bellied up to the low counter at Duly’s Coney Island in 2014.

That was the year we sat down with Grace Keros of American Coney Island fame, and she told us: “Now, everyone wants to be on the bandwagon and be part of Detroit or have something to do with Detroit.”

A Detroit original
No popular dish is created out of a vacuum. Most of them come from being at the confluence of different trends, and their success tends to be a product of them.

The foundation of the dish is undeniably German, but the trimmings were all pretty new to the area 100 years ago — except for chopped onion, of course.

Texas-born chili con carne was making inroads around Michigan, finding early followings in Cincinnati, Ohio, and Green Bay, Wis. The R.T. French Company is believed to have first introduced yellow mustard as a condiment for domestic use on frankfurters at the 1904 St. Louis World’s Fair. The creamy yellow topping was introduced as “cream salad” mustard — and is now called “classic yellow” by the present owners of French’s.

But perhaps no single event contributed to the proliferation of coney island diners like Prohibition.

Though it’s seldom discussed today, most working-class men in the United States did not eat in restaurants, which were for the upper class. Instead, workingmen ate in taverns, where food was freely available for those drinking.

Outlawing taverns had more than the effect of giving the tremendous profits of selling alcohol to organized crime: It meant that businesses offering meals to workingmen had to find a place to compete. Most of the practices of the modern food-service industry, with its razor-thin profit margins, find their roots in Prohibition, as the diner emerged as a viable business.

Naturally, these working-class eateries served simple fare to men in a hurry to get back to their jobs. It was only natural that they should draw on the lunch wagons of the turn of the last century, the “street food” of an earlier era.

Add it all together and what you get is a dish that not only met the demands of the day, but did it with a bit of style. When you consider that chili and “cream salad” mustard were bits of flair as new to Detroit as, say, poutine is today. (And, true to form, the poutine dog made its debut at Tigers games in 2014.)

Why a ‘coney dog’?
Another difficulty hampering the appreciation of the coney dog is how it comes by that unusual name. Why should a diner be called a “coney island” (lowercase) and its chief delicacy be known as a “coney dog?”

The researchers of Wikipedia suggest that the Greek and Macedonian immigrants arrived in New York after “hot dog” signs had been banned at Coney Island, so they began calling the hot dogs “coney islands” instead. (According to multiple sources, the name “hot dog” was suppressed because it called to mind accusations that frankfurters contained dog meat — an association perhaps once true but worn away by time.)

Frankly, we doubt this story a bit. Immigrants didn’t arrive all alone, figuring things out from signs. They arrived into established communities ready to receive them. Surely New York’s community of Greek and Macedonian immigrants could hip the new arrivals to the various names for “frankfurter.”

And “frankfurter” is a perfectly good word, probably the best word of all. Unlike “red hots,” “wieners,” and “coneys,” there’s no misunderstanding what a frankfurter is. You’ll still hear a hot dog called by that name in New York, whether it’s covered with chili or sauerkraut. But very few Michiganders use the F-word to describe one. Here, it’s usually a “hot dog” — unless, of course, it’s a “coney dog.”

So it seems sort of hard to believe that a handful of newly minted Americans arrived in Detroit ready to force a new name for “frankfurter” on three-quarters of a million people already familiar with the dish. It seems to us something else was at work here.

That suspicion finds support in a phone call we received three years ago. The caller, reader Jerry Holowka, reminded us about just how strong anti-German sentiment was in the 1910s, just when hot dog shops were being established in Michigan.

Today’s Americans might be surprised, 100 years after the First World War, at just how vilified the German people were in 1917.

For several years, American mass media had been beating a drum for war against the Central Powers. They used every tool at their disposal to condemn the Germans, regardless of whether it was true. For instance, in May 1915, the Bryce Report was published with sensationalist and evidence-free accounts of rape and mutilation, of barbaric German soldiers bayonetting babies and committing mass rape. American newspapers simply reprinted it.

That same month, the Lusitania was torpedoed by Germans killing 128 U.S. citizens. Their deaths were played up in the news media. (Less publicized was the fact that the ship was carrying hundreds of tons of war munitions, hence presenting a suitable military target.)

In the next two years, Germanophobia became a national affliction, and culminated 100 years ago with the publication of the Zimmerman Telegram in March 1917 and the United States officially entering the war against Germany on April 4, 1917.

As the most honest of us are aware, when Americans are inflamed with passion, they often make their worst decisions. Such it was 100 years ago. In that environment of propaganda-driven hatred, something bizarre happened to the way Americans viewed all things German.

For a more recent example, recall 2003, when France’s opposition to the U.S. invasion of Iraq prompted many restaurants to remove France completely from the name of our beloved national side order. Instead, many Americans declared our Julienne-cut fried potatoes “freedom fries” instead. 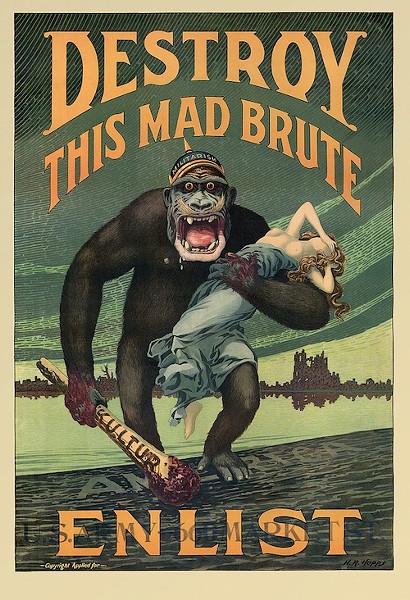 having a German name was no laughing matter. Anything with a German connotation, however remote or faint, was relentlessly Anglicized and Americanized. Though they now remind us of America and not Hamburg, Germany, hamburgers were dubbed “liberty sandwiches.” Sauerkraut became known as “liberty cabbage.” Companies, streets and even towns with German names were changed to English- and American-sounding ones. For instance, on Sept. 1, 1916, in Ontario, the town of Berlin changed its name to Kitchener. (On the American side, in 1919, Michigan’s town of Berlin was renamed after the World War I battlefield of Marne.)

Would a fledgling business owner be likely to tie his fortunes to a compromised name like “hot dog” (remember that charge that franks contained a little Fido?) — or a name associated with a baby-killing, power-mad country the United States declared war on last month? In that light, doesn’t choosing neither start to look good? In that environment of anti-German hysteria, why not pick a name associated with the all-American playground known as Coney Island?

In any event, this new generation of immigrant hot dog shop owners would be extremely unlikely to call their creations what they had been called — frankfurters.

But what was that we said about a dish representing a certain time and place? Though the propaganda-driven prejudice seems ugly from today’s vantage point, for many it’s just the essence of regional quaintness for a place like Detroit to name frankfurters for a place 600 miles distant.

Actually, we take that back: To New Yorkers, Coney Island is a place.

For metro Detroiters, it’s a place in their hearts — and stomachs.