Seven new restaurants and bars are planned for the Wurlitzer Building 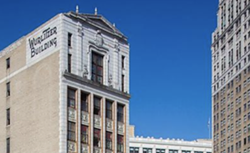 The Siren Hotel, a boutique hotel that's renovating downtown Detroit's Wurlitzer Building, will be home to seven restaurants and bars.

Bay City's Populace Coffee Shop and roaster will roll out a new cafe in the hotel lobby, while former Standby bartender Dorothy Elizabeth is developing the Candy Bar - a roughly 30-seat craft cocktail lounge - on the Wurlitzer's ground floor. Elizabeth tells Eater that she’ll employ her background in chemistry and molecular mixology in the project.

Another restaurant that hasn't yet been announced is planned for the second floor, while three more restaurants and bars - including one on the rooftop - are planned for 2018.