Even the brightest idea requires dogged perseverance to see it through. Such it was in the saga of the Detroit Shipping Company. It’s the brainchild of three native Michiganders whose mission is to develop a roughly 12,000-square-foot entertainment venue - complete with a beer garden, upscale street-food vendors, artists' space, and start-up retail - out of shipping containers in the Cass Corridor.

The project - formerly called ShipYard Detroit - was announced in August 2015, but obstacles, red tape, and friction among various entities made ground-breaking anything but a certainty. However, Detroit Shipping Company starts construction this week. And when it's complete later this year you won’t find a Subway or Chick-fil-A in its food court, which will be composed of 21 repurposed shipping containers.

Instead, five local food vendors signed on - Detroit Dog Co., Brujo Tacos & Tapas, COOP, Monty’s Beef Company and Bangkok96. Two bars with open-air seating will anchor the center of the complex and be flanked by the food-vendor containers. The negative space will allow for a free-flowing neighborhood block atmosphere.

The announcement marks what the three partners behind the project - Jonathan Hartzell, James Therkalsen, and lead architect Dominic Walbridge - hope marks the final chapter of the effort. If all goes according to plan, it'll open in mid-October.

Hartzell and Therkalsen grew up across the street from each other in Royal Oak and first partnered on Good Guys Painting - a company Hartzell has owned and operated for the last 14 years - before bandying around the idea for a unique Detroit beer garden in late 2011. Long on vision but short on capital, Therkalsen sought out investors and brought in Walbridge, an architect who has worked in New York City, Shanghai, and Chicago.

Initially, the trio wanted to set up shop in Corktown, but found a more feasible, city-owned lot in Midtown in the winter of 2015. Detroit officials were eager to expedite the process, and the project was issued a building permit in November 2016, though clearing environmental, health, and banking hurdles proved more challenging than anticipated. But all systems are finally go, and the project is slated for a four-month build-out.

While developing the idea, the revitalization of the Cass Corridor happened rapidly - Third Man Records, Jolly Pumpkin, Grey Ghost, 8 Degrees of Plato, The Peterboro, Slows To Go, and others popped up around venerable spots like the Bronx Bar. The DSC’s partners saw an opportunity at the south end of the Corridor to provide a one-stop shop for beer, gourmet street food, sports viewing, music, and wares from local retailers. The site is a block north of the recently-announced Founders Taproom, which will open on Charlotte, and the advent of the new Little Caesars Arena a few blocks away makes the location all the more optimal.

Shipping container projects are also suddenly hot, and among such developments in Detroit are a restaurant in Campus Martius, condos in Corktown, a three-level mixed-use space in Corktown, and more.

Though the conditions are favorable, any project worth its salt requires risks, calculated or otherwise. Therkalsen discussed the pitfalls of taking this idea from abstract to completion: “The original plan was to utilize just two shipping containers as bars with picnic tables arranged for an outdoor beer garden.” To keep costs low, the partners wanted food trucks, but investors and banks were gun-shy on seed-funding a “seasonal venture.”

There was also a zoning need to have at least a two-story structure which eschewed initial budgeting, timelines, and schematics.

“We went from a simple beer garden/food truck layout to a two-story build with a courtyard, five kitchen stalls, five artists/retailers spaces, a central  stage, and roof decks … suddenly I'm looking at a project that, if it goes poorly, could cost me my house and my kids' college fund. That's no joke,” Therkalsen says. 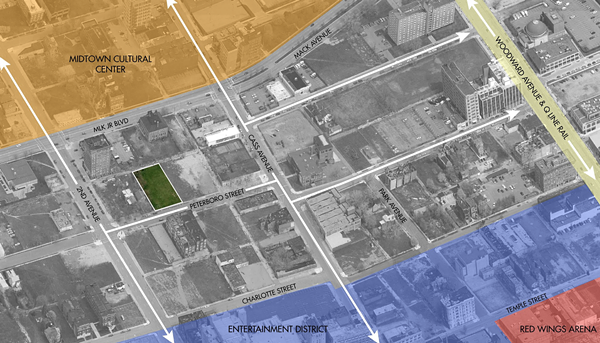 Walbridge and partner Michael Miller were then charged with the difficult task of putting down a blueprint for a non-traditional construction model that remained in flux.

“We knew we needed to expand on the owner’s original idea to give it some juice. We knew we had to give the city and the investors a clear concept, a clear vision, something that people would get excited about,” Walbridge tells MT.

“In the end, I think the team has stayed true to this concept and will deliver what we think will be a space that people will enjoy. [The project] was conceived as a destination to bridge the gap between two established neighborhoods in Midtown - the Wayne State/cultural center and the sports and entertainment district near downtown."