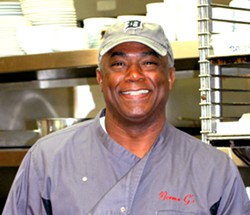 Norma G's food truck is the only in the city rolling out Caribbean cuisine and Trinidadian comfort foods, and for that, it has quickly established itself as a favorite.

But owner Lester Gouvia says there's a lot more he can do with his native cuisine when he opens a casual fine dining restaurant in the Jefferson Chalmers neighborhood.

"A lot of the dishes I want to offer are hard to do in the food truck, or do in a takeout container," he says. "This is really about being able to provide food in more of a comfortable setting. A lot of dishes I do that don't translate well on the food truck, we'll do here."

Construction is underway and Gouvia says he's targeting a fall opening at 14700 E. Jefferson Ave., but he stresses that there's no firm date in place.

When Norma G's does open, expect traditional Caribbean and Trinidadian dishes - Gouvia was born in Trinidad -  like coo coo with stew fish, callaloo, or codfish balls. The latter is made with dried codfish that's sautéed with herbs, vegetables, other seasoning, and mashed potatoes. It's blended together into a ball, fried, and served with a garlic or chipotle mayo.

Gouvia says Norma's menu will be vegan friendly, and notes that the flavors of Trinidad are influenced by a range of cuisines from the island's colonizers like the French, Spanish, Dutch, and English. Even Chinese populations made their way through the Caribbean and left their prints on some of the recipes.

Though Gouvia says most Detroiters aren't familiar with plates like coo coo or codfish, he suspects that they'll warm up to the flavors.

my son eats it, so if he does, believe me other people will like it," Gouvia jokes.


As for the vibe, Norma's will be a Caribbean place, but don't expect sea shells and palm trees. Gouvia is going for something a little more tasteful in his 90-seat restaurant, which will also hold an outdoor patio.

"I'm not knocking that, but when I think about Caribbean - it's about the food, atmosphere meeting other people, and I want to make the restaurant comfortable. Colorful and casual, but not tacky," he says. "There will be nice

furnishing going in and colors will be key. Hopefully I can deliver an atmosphere where people want to hang out."

A job in the financial industry led Gouvia to metro Detroit. He only intended to stay a few years, but never left. Jefferson-Chalmers appealed to him more than downtown, Midtown, or other neighborhoods because he feels that Norma's will have a greater impact there.

"I didn't see myself having a big impact Midtown or downtown, and financially it doesn't make sense because the price points are too high," he says.

"I'm in business, I've got to generate revenue, and pay people well, but I ... want to help generate traffic and be a part of the change, and I think this is still one of neighborhoods that has potential for that."

Gouvia worked with SWOT City to pull together funding for the roughly $450,000 project from a variety of sources, including a $60,000 Motor City Match Grant. He's leasing the building from the Jefferson Inc. Stay tuned for more details.