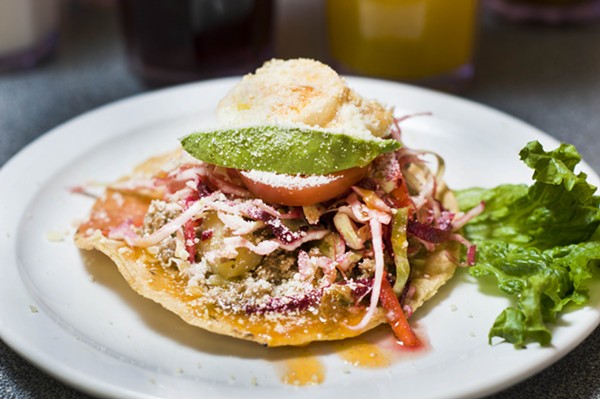 Irene Serrano, co-owner of Antonio's Coney Island on Washtenaw Avenue in Ypsilanti Township, says her small shop just east of Golfside Road only sells "about two" coney dogs per day. While sagging chili dog sales would seem to spell doom for a coney island, it's actually a sign of success at Antonio's.

In short, the "coney island" tag at Antonio's is slightly misleading as the buzz around the restaurant is the result of its Honduran menu. And it's not alone in the Ypsilanti area. Antonio's is one of several Central American restaurants trading in the dishes of Washtenaw County's growing Honduran, Guatemalan, and Salvadoran populations' dishes, and more are in the works.

(See 29 photos of the Ypsi area's Central American dishes here.)
Though Serrano and Martinez are Mexican, a Honduran friend, Norma Cabellero, proposed the idea for taking Antonio's menu a new direction in early 2015. "In the beginning we were scared about [serving Honduran food]. We thought, 'Maybe it will not be a hit with people,'" Serrano tells MT. "But people are interested to try the food ... and we have a lot of people in the Honduras community here."

Just a mile down Washtenaw in Ypsilanti, Panaderìa La Bendición bakes the breads, cookies, and other sweets of Guatemala. And just a few blocks away in downtown Ypsilanti, Enceuntro Latino, a Guatemalan restaurant, took over a classic diner space on Michigan Avenue.

Its owner, Manuel De Paz, runs the restaurant with his family and "adopted daughter" Karina Valle, who is Salvadoran. When asked why so many Central American people landed in Ypsilanti, they say they aren't sure what first attracted people from their native countries. But families that arrive here love the area, they in turn bring more family members and friends, the cycle repeats, and suddenly a real community develops.

Though there are no current stats available on how many Central American people are in the Ypsi area, an official from Ypsilanti Community Schools tells us they've seen a jump in the number of students from the region.

De Paz arrived 13 years ago from his native Zacapa, Guatemala. He earned his keep and learned the American restaurant biz in the kitchen at Ann Arbor's Mediterrano before striking out on his own.

"He decided it was time [to] show Ypsilanti Guatemalan cuisine, since there's no other restaurants like it here," Karina says, translating for De Paz.

While the uninitiated might suspect Guatemalan food is a variation of that of Mexico just to the north, it's quite different. De Paz says that in Guatemalan cooking you'll detect the presence of olive oil, vinegar, thyme, basil, bay leaves, pumpkin seed, cilantro, chile guajillo, chile pasilla, bell peppers, tomatoes, and onions. Encuentro's puffy tortillas are handmade with flour at the restaurant and designed to package larger cuts of meat common to Guatemalan cuisine, as opposed to the flatter corn tortillas in Mexico that often wrap up shredded chicken or beef.

In the garnachas, fresh tortillas holding moist ground beef are topped with two onion slices. De Paz enlivens each with an orange, zesty sauce of pureed tomatoes, bell pepper, garlic, cilantro, olive oil, salt, and pepper. The "tomato sauce" is also what sets apart the tortilla de harina, a burrito-like sandwich rolled with tender, flavorful strips of beef and crunchy pickled cabbage. It's all balanced out with mayo.

Similarly, the pollo adobo chicken is bright with flavor from marinating in a sauce of garlic, tomatoes, bell peppers, and spices. It's then served with a mound of black beans and rice, tortillas, and fresh salsa.

For dessert, atol de elote is a thick, warm drink of corn, milk, and vanilla that's spiced with cinnamon and serves as a perfect antidote to the early fall chills. Also ask for the jugo de melon, which tastes like liquified ripe cantaloupe.

At Antonio's we sampled the Honduran-style chicken tacos, which are encased taquito-style in a rolled and deep-fried tortilla, then topped with layers of acidic cabbage slaw, tomato slices, and parmesan cheese.

The caldo de res is Antonio's beef stew that's made up of tender, flavorful meat and large hunks of yucca, zucchini, onion, and other vegetables. Perhaps the restaurant's best dish is the pollo frito (fried chicken) which jumps with the bright flavor of a mustard sauce coating the bird. The meat needs to be pulled from the bone and jumbled up with the fried green bananas and cabbage slaw that Irene serves on the side. Another hit is the loroco pupusa, a cheese and flower-stuffed fried tortilla that's a common Central American plate.

On the sweeter side, the plátano rito relleno (stuffed plantain) arrives with a splayed fried plantain holding a generous portion of beans, salty cheese, and a crisscross of sweet creme. All of Antonio's five Honduran aguas frescas — like horchata and tamarindo — are made in-house.

At Panaderìa La Bendición on Cross Street, owner Edyn Vasquez notes that Guatemalan pastries use unique types of yeast and salt. Guatemala is also a tropical country with beaches facing the Atlantic and Pacific Oceans, so it's not surprising to find banana, pineapple, coconut, and other similar fruits in La Bendición's recipe book. Interestingly, it's the simple items, like the cinnamon-y, salty, and buttery cookie that are among the best.

We stopped in La Bendicion and picked up 14 pastries for the very low price of $8. 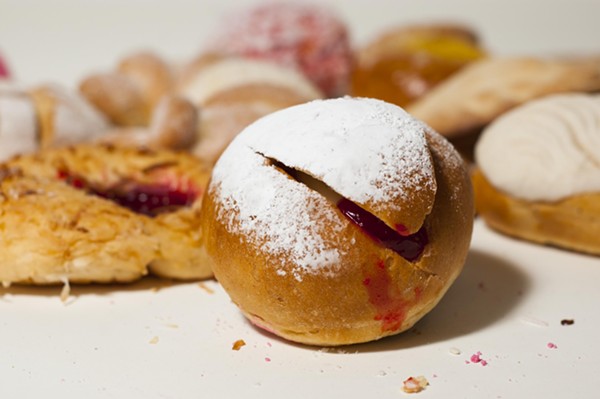