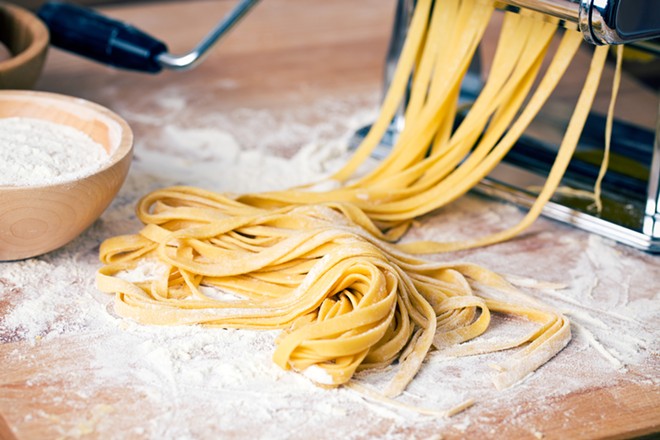 Any restaurant that can be described as "pasta-focused" automatically triggers this kind of response:

Turns out that the former executive chef of Bacco Ristorante in Southfield Anthony Lombardo is opening a Roman inspired Italian restaurant in Midtown, where he will focus heavily on pasta, reports Eater.

Lombardo quit working at Bacco weeks ago to finalize the restaurant that will be called SheWolf Pastificio & Bar and will open in early 2018.

Bacco tells Eater that he traveled over the summer to Rome where he studied and explored pasta-making at the city's pastificios, otherwise known as little pasta factories. He says that really immersed himself into the authentic markets that are still doing everything homemade. Lombardo also revealed that the menu will focus on the "Big 3" in Roman pasta —  amatriciana, cacio e pepe, and carbona. It just all sounds so delicious.

The 3,300-square-foot space will be nestled on the ground floor of the new Selden building that is under construction right next to Honest John's. The restaurant's Instagram account shared a video of being pasta made and we seriously cannot wait to try.

And as for the name...while this writer immediately thinks of Shakira's 2009 hit "She Wolf," Lombardo tells Eater that the name comes from  the "wolf in Roman mythology that nursed and sheltered the founders of Rome, Romulus and Remus."