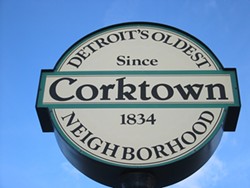 Cork and Gabel – a new restaurant that will share a block with Two James Distillery – is under renovation at Michigan Ave. and 16th St.

Eater reports that chef/co-owner Matt McGrail is developing a menu of comfort dishes that incorporate the flavors of Ireland, Germany, and Italy. McGrail previously worked at Pei Wei and in Macy's food division.

"We wanted to take Corktown back to its immigrant roots," McGrail, 37, tells Crain's.

He says the bar will hold eight beer taps, and he's discussing a partnership with an unnamed local brewer. The 70-seat bar/restaurant will also offer a seasonal wine list and a selection of finer bourbon, whiskey, and scotch.