Ask the average coffee drinker in the U.S. to think of the world's best coffee growing regions and the first spot that pops to mind likely isn't Jabal Haraz near the Port of Mocha in Yemen.

And yet the region is considered the birthplace of coffee where the term “Arabica” originated. Haraz's altitude – around 2,500 meters – wet summers, and cold-but-mild winters make for ideal growing conditions.

Prior to the ascension of Central and South American coffee producers, this is where the world knew to find the best coffee, and its beans are once again sought after – a pound can exceed $200.

But you can find it for much cheaper in metro Detroit at a recently-opened coffee shop.

Dearborn's Qahwah House owner Ibrahim Alhasbani's family grew and supplied Yemeni coffee for hundred years, and he flies the beans directly from the family farm, which allows him to keep the price down.

Alhasbani – a Yemen-native who lived in New York City before moving here last year to raise his child – discusses Haraz and Mocha with pride, and says spreading the word about Yemeni coffee is as important as making money at Qahwah. He says it's his mission to reintroduce the nation's coffee to the world.

"I want to give the people an education about the coffee from Yemen, tell them the story about the coffee, that mocha is not chocolate. It's a port in Yemen where the first coffee went out to the world," he tells us.

Some coffee experts concur that Yemen is coffee's birthplace, thus the lineage of plants in Colombia, Brazil, Guatemala, and so on can be traced to an area around Haraz. And there's simply no beating the original, Alhasbani tells us, pointing out his region's unique climate and soil. "It's not like when you put the plant somewhere else," he says, adding that South and Central American nations are mostly about bulk production, while Yemen's production is still small scale.

But if it's so good, then why isn't it in every pot in town?

There are few importers who will work in the isolated region, the methods for harvesting and processing the beans are largely the same now as they were a thousand years ago, it's all organic, there aren't many farms growing beans (many of the nation's farmers are now producing a mild stimulant called khat) and it's difficult and expensive to package and ship the beans in a way that doesn't compromise the quality. It also doesn't help that the nation is mired in a civil war. 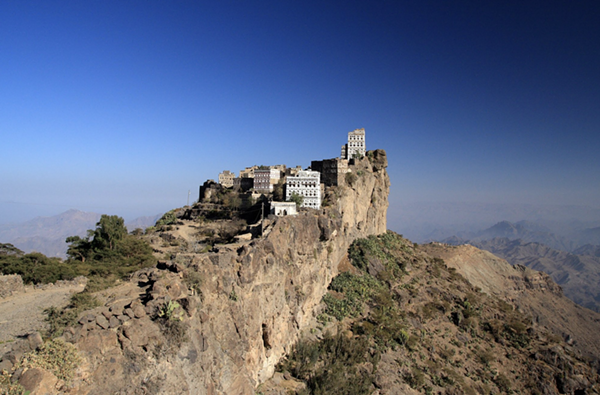 But Alhasbani has an advantage by owning the farm. The traditional coffee – called mocha, which is not to be confused with the coffee and chocolate drink – is spicy and floral, tasting nearly like a tea. It's flavored with a combination of cinnamon, cardamom, and ginger. When served black, the Yemeni beans hold unique chocolate and fruit notes.

Coffee at Qahwah House (which translates to "Coffee House") is often served with sabaya, a super sweet Yemeni pastry with layers of flakey dough and honey, though Qahwah also offers pastries made by Zingerman's.

Most everything on the menu is under $5, which will also go a long way to helping Alhasbani carry out his mission.

"Everyone needs to know about Yemeni coffee and I want to make it a star again, like it was in the beginning," he says.