In a press release, Heaselgrave said she has been searching for a Midtown location for two years and happened upon the space after hearing through a friend that the leather goods store was seeking an operating partner for their cafe space.

The coffee shop opened on Friday, Nov. 24 and will remain open as a pop-up through the end of December, Heaselgrave tells Metro Times.

"Depending if we're busy enough during the month of December, we'll potentially negotiate a long term lease," Heaselgrave says. 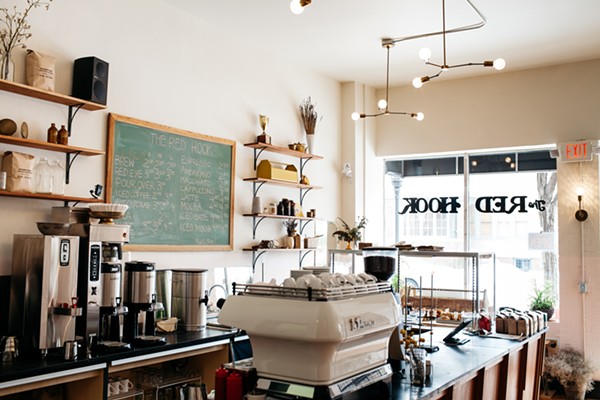 Will Leather Goods opened in the former Tom Boy Market back in 2014. The high end store sells expensive, but well-made leather items like backpacks, wallets, and hats.

Bum rap
By Detroitblogger John
Culture
The cafe space has been part of their store concept since the beginning, and for a while they held a local guest speakers series in the area every Friday morning. Heaselgrave says she's open to using that space to hold events, if a long term lease comes to fruition.

Heaselgrave expressed her excitement for the new venture in the press release, saying, "We live, dine, and shop in Midtown and are so excited to contribute to the growth of this community by building another small hub for neighbors to gather, work, and drink coffee.”

Midtown Detroit Inc. executive director Sue Mosey also expressed excitement about the partnership, saying, "Red Hook is a great brand with a great product to back it up. Midtown Detroit is really excited to have this quality new coffee operation opening in the heart of the district."

Who’s shopping at Will Leather Goods?
High end retailer sells beautiful and expensive items
By Alysa Zavala-Offman
Culture
Heaselgrave currently operates a location on Nine Mile in Ferndale as well as a location on Agnes Street in West Village.