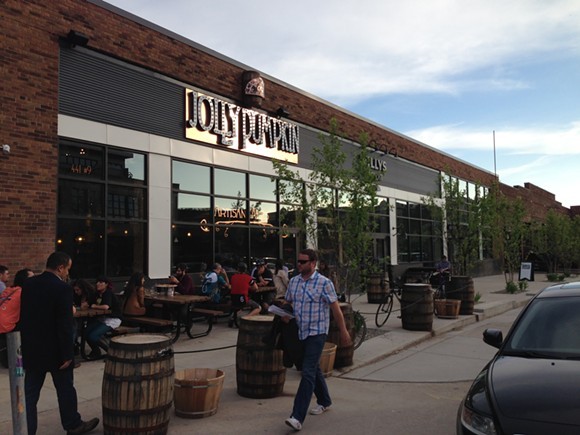 Draft magazine recognized Dexter-based Jolly Pumpkin Artisan Ales for brewing one of the top 25 beers of 2017.

The company produced the tart Saison Gigantic Phucket: It's not that far from Laos in collaboration with Portland's Gigantic Brewing Co., MLive reports.

On its website, Jolly Pumpkin notes that the beer spends eight months in oak barrels and holds "aromas of lime, unripe pear, and the classic pineapple tinted notes of Jolly Pumpkin funk," and the three varieties of hops "meld together flavors of citrus, pine, and white grape that linger quietly before finishing slightly bitter with mild tartness."


This tart saison demonstrates a mastery of ingredients, a weaving of each’s best aspects that enhance rather than overwhelm each other. Jasmine rice and palm sugar in the mash dry out the texture, while lime peel and a trio of Cascade, Chinook and Jarrylo hops float delicately at the periphery of the beer, introducing flavors of honeysuckle, citrus zest and grains of paradise. Each addition feels purposeful, contributing to an irrefutably food-friendly sip that closes slightly tart, dry and bitter, leaving just a whisper of green pear and gewürztraminer flavors behind. “Tropical” was perhaps the beer word of the year, and this beer exemplifies the trend’s elegant, finessed side.


Jolly Pumpkin opened a new taphouse last year in Royal Oak, and that location joins others in Dexter, Traverse City, Ann Arbor, and Chicago. Gigantic Phucket is distributed in 15 states including Michigan.