The entertainment venue, food hall, and beer garden is taking shape on Peterboro Street in Cass Corridor, and is expected to open sometime this spring. When it’s completed, 21 repurposed shipping containers will compose the roughly 12,000-square-foot space.

, Detroit Shipping Company's director of operations and Brujo's owner, describes Bread Meats Bread as trading in "expressive, culinary-driven sandwiches." The restaurant writes on its website that it offers craft sandwiches, small plates, craft beer, and wine, and its chefs "ensure every ingredient is chosen based on quality, region, and sustainability."


Bread Meats Bread Chef David Prantera is a veteran who launched his career at Caesars Windsor before moving on to kitchens in high end hotels in Bahrain and Dubai. He eventually landed a gig as an executive chef of a boutique villa property in Dubai before returning to Windsor in 2015 after six years in the Middle East.

It's not immediately clear if the menu will mirror that in Windsor, which semi-regularly changes. But current items like the Steel Curtain (slow roasted beef, pickled mustard, mushrooms, and Swiss cheese) or the Johnny Sokko (teriyaki chicken, shaved vegetables, and wasabi pea aioli) give you an idea of the direction Bread Meats Bread is headed.

Motor Burger is a high end burger restaurant and microbrewery that describes itself as a "present day rendition of a vintage burger joint with a modern twist on design." Its Deux Chevaux (grilled beef, sharp dijon mustard, gruyere cheese, baby spinach, and smoked bacon balsamic caramelized onions) is its most popular sandwich, and made Thrillist's and Reader Digest's "Best Burgers in Canada" lists. Each menu item name is a play on a vintage auto, like the Twin Barracudas (two panko encrusted haddock sliders, creamy cajun slaw, cheddar cheese, and pickle). Find its menu here.

"Everyone involved in the project has a great head on their shoulders and has been successful in food and beverage," Drakopoulos says. "I'm happy we didn't compromise. They wanted to have

this food-centric space populated by really great chefs, and I think we’ve accomplished that."


The Detroit Shipping Company project is the product of owners Jonathan Hartzell, James Therkalsen, and architect Dominic Walbridge, who started work on it in 2015. They recently brought on Drakopoulos — who also owns Berkley's Republica — to help manage the operation.

It was supposed to open in October but the crew ran into some setbacks. The partners aren't part of a large company, so arranging the financing has taken longer than anticipated, Drakopoulos says


"We’re the little guy trying to get stuff done so we've had some delays," he tells MT, adding that they now expect to open this spring.

For more on how the project came together, check out our previous story. Find The Detroit Shipping Container Company's Facebook page is here. 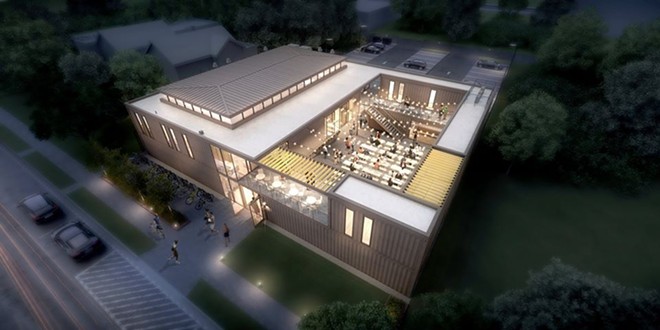