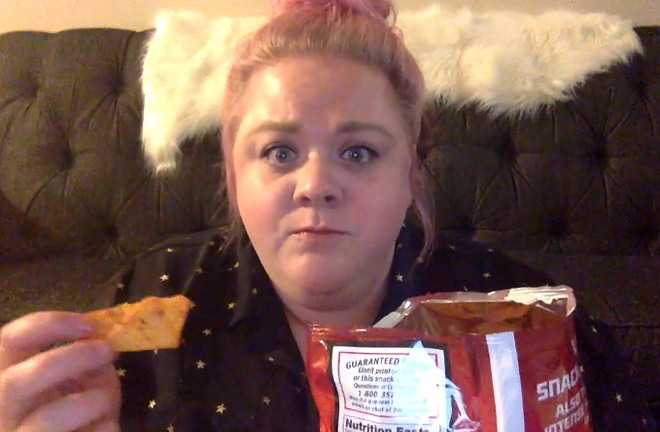 The internet has been abuzz over the last few days since it was shared that PepsiCo. chief executive Indra Nooyi said women don't eat Doritos the same way as men do and suggested the company was producing snacks packaged specifically for women.

"Lady Doritos" news quickly blew up online and Twitter exploded like the crunch of a million Cool Ranch chips.

I didn't even know it was possible to be offended by a chip. But @Doritos went and proved me wrong. #LadyDoritos

But will my delicate soft hands be able to open the bag? #LadyDoritos https://t.co/fY8cEDa5FD

On Monday, Feb. 5, lady Michigander Calli McCain went to Facebook to share her thoughts on Doritos' newest marketing idea. While downing a bag of Nacho Cheese Doritos, McCain came down on the chip makers with hilarious wit and satire.

"Feminism — pack it up, go home. We have our own fucking chips now," McCain said while explaining the significance of the company's potential marketing move.

Nooyi has since squashed online speculation that the company is creating Doritos for women.

“We already have Doritos for women — they’re called Doritos," she said in a Tuesday statement.

Anthony Spak is an editorial intern at Metro Times and a recent graduate of Oakland University’s journalism program. Spak spends most of his time in Detroit playing music or eating gyros at Golden Fleece.